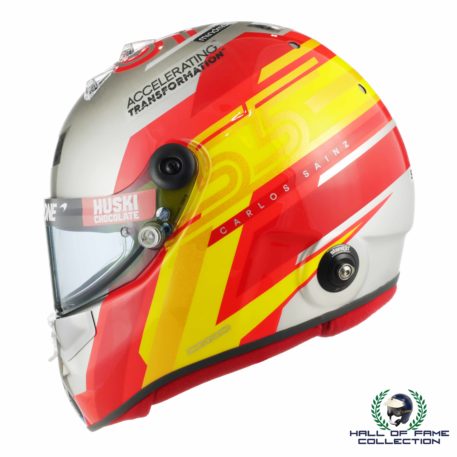 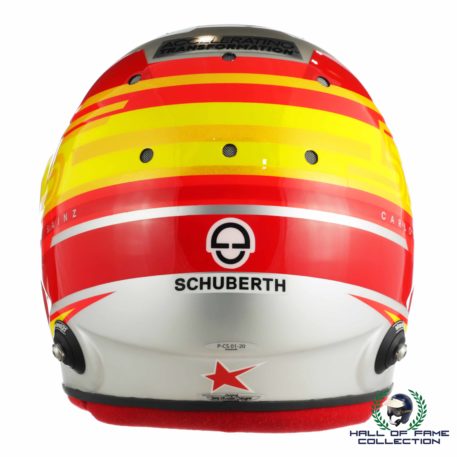 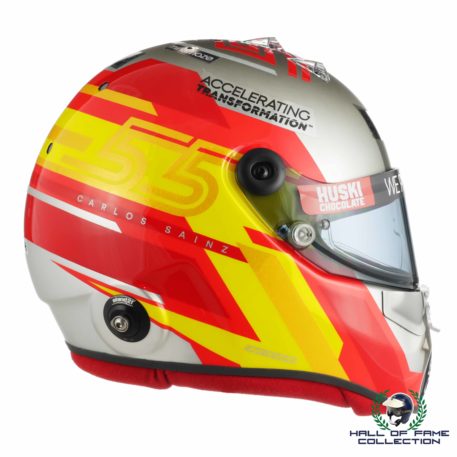 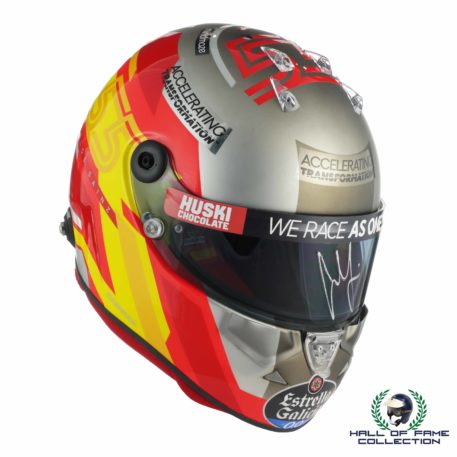 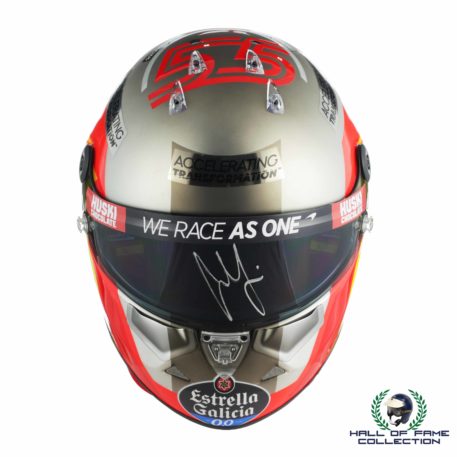 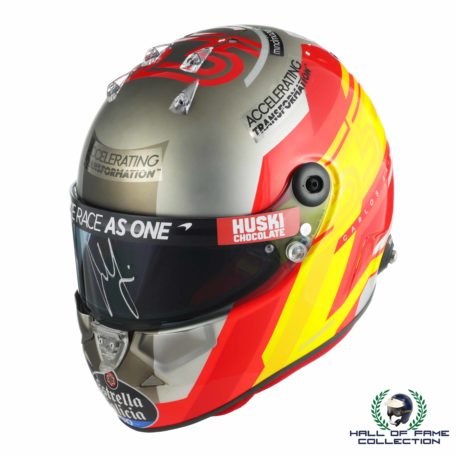 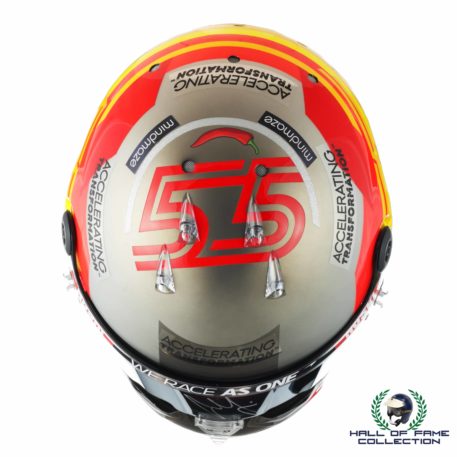 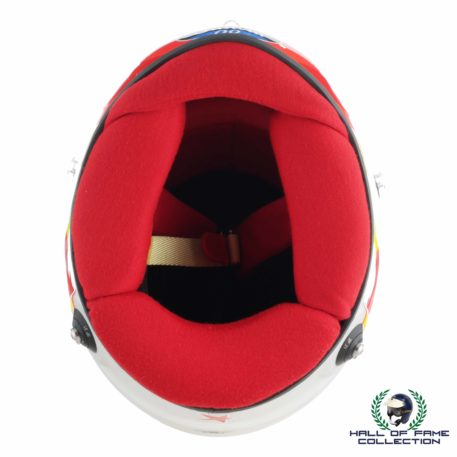 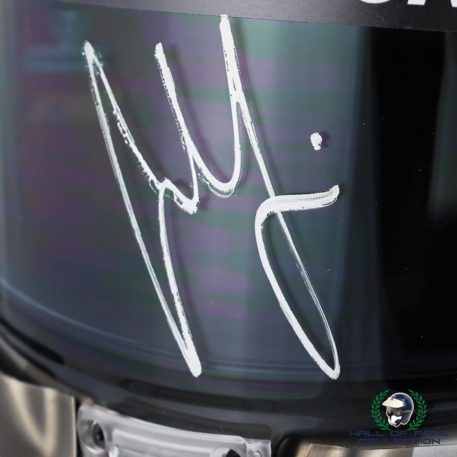 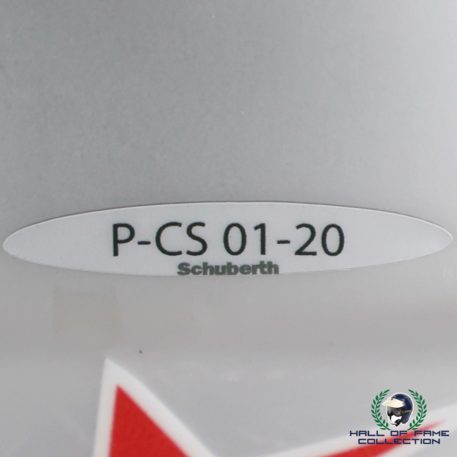 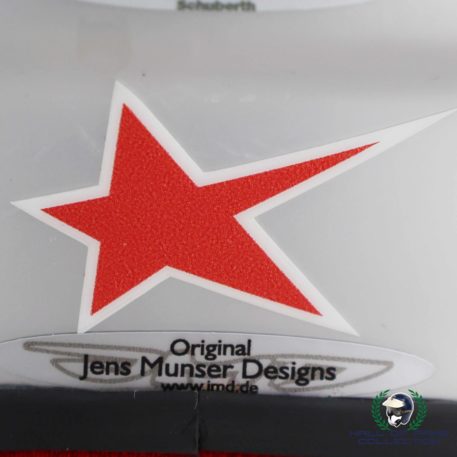 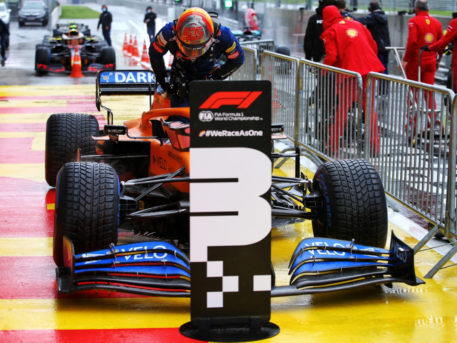 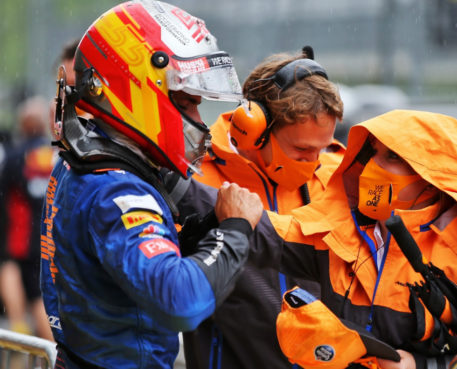 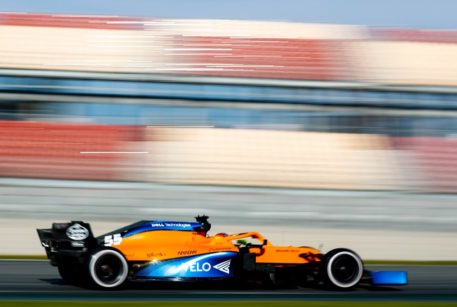 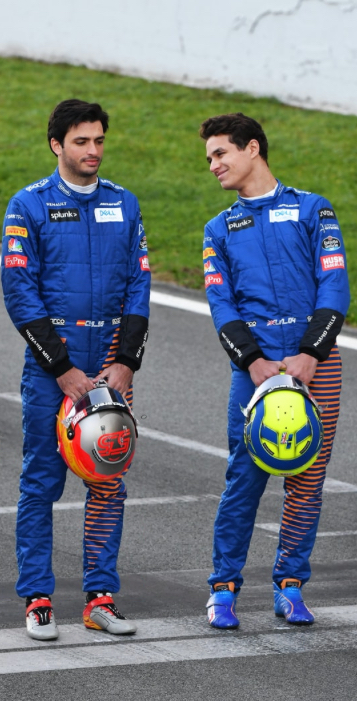 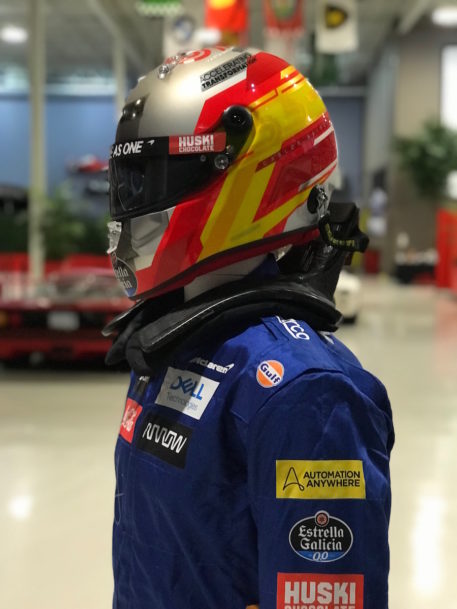 This helmet was used by McLaren as an official promotional helmet for driver photo shoots and display purposes in the McLaren hospitality at many races in the 2020 F1 season. Considering it was used for promo purposes it still remains in near mint condition. This Davedesigns helmet is painted by JMD and looks just like Sainz’ 2020 helmet that he wore during his final season with McLaren. The stunning helmet has a matte silver base with glossy red, orange and yellow stripping. Sainz’ number 55 is in gold metallic on both sides, on the top 55 is in red crowned with a chili pepper. The rest of the helmet has sponsors logos from Mindmaze, Accelerating Performance, Huski Chocolate and Carlos’ personal sponsor Estrella Galicia. The helmet details are perfect down to the inside of the helmet lined in red fabric, even the Schuberth logo and the Spanish flag detail on either side of the eye port foam are present. Carlos has personally signed the visor in silver marker pen.

Carlos Sainz was part of the Red Bull Junior driver programme, driving under their banner for all of his junior racing career in Formula BMW, Formula 3, GP3 and Formula Renault 3.5 where he won the championship in 2014.  In 2015 Sainz moved up to F1 with a race seat with Scuderia Toro Rosso. He continued with them into the 2017 season until he cut ties with Red Bull and moved to Renault for the final 4 races in 2017. In 2019 he made the switch to McLaren, achieving his first podium in F1 with a 3rd place in Brazil, ending the season in 6th in the standings. A feat he repeated the next year at McLaren, with a his second podium but one step higher to 2nd and once again ending 6th in the Championship. With many top ten finishes in his two seasons in McLaren it caught the eye of Ferrari and he was duly signed with them for 2021 F1 season. So far in 2021 Carlos scored a 2nd place Finish in Monaco and a 3rd place finish in Hungary. That elusive first win for you young Spaniard is surly just around the corner.

The helmet came direct from McLaren and is hand signed by the driver complete with a Certificate of Authenticity.