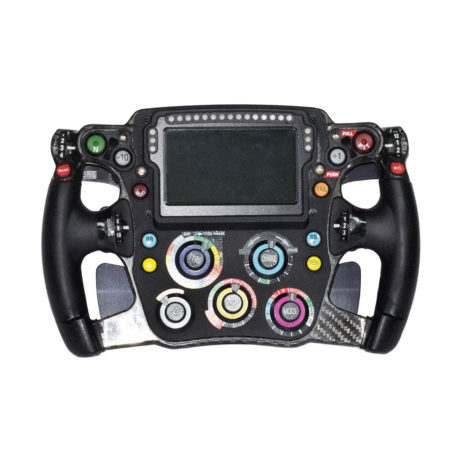 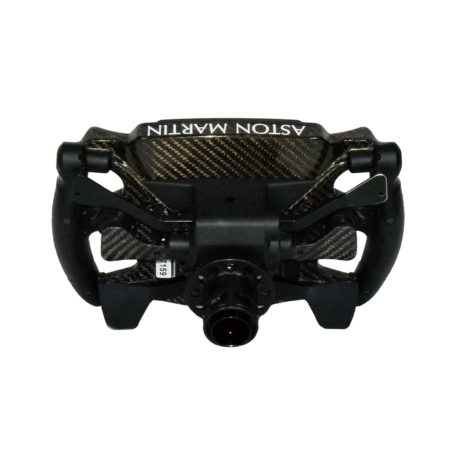 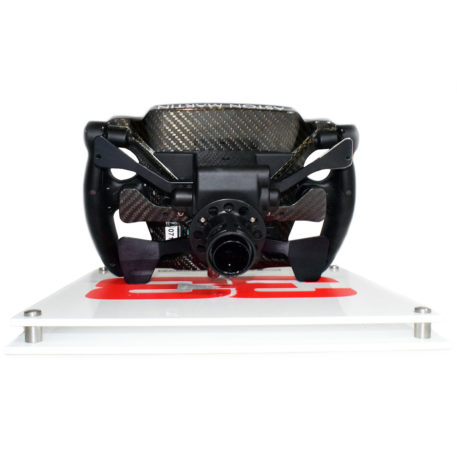 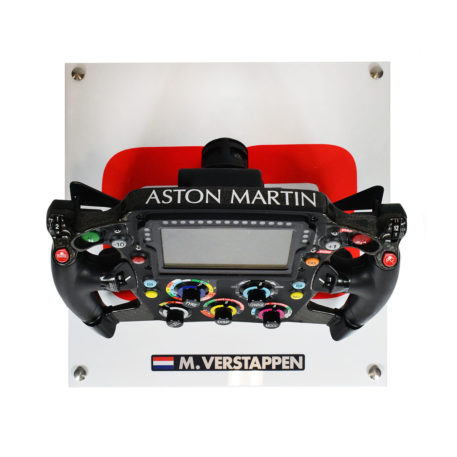 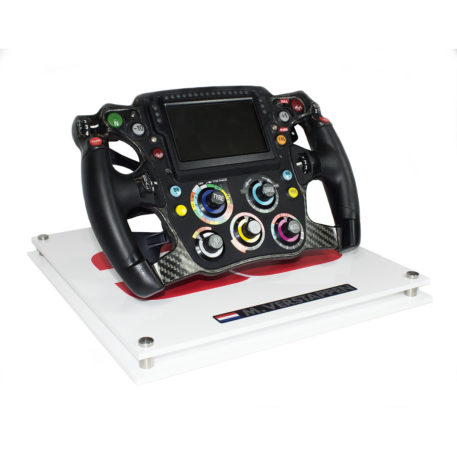 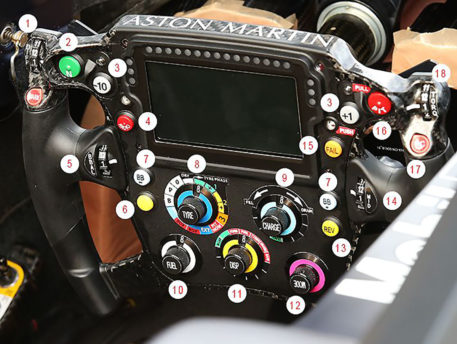 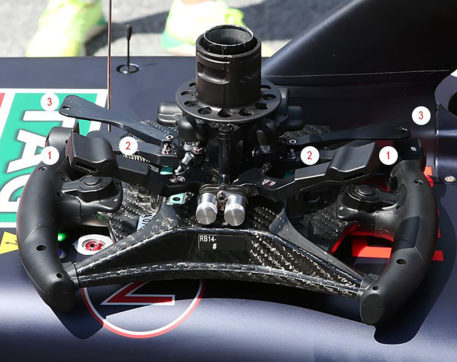 One of the original race used steering wheels that was used by Max Verstappen while driving for the Red Bull Racing F1 team from 2016 until the end of the 2018 season. During these years Verstappen piloted the TAG Heuer 1.6 V6t powered RB 12, 13 and 14 cars, where he would have five wins, nine second and eight third place finishes.

Today’s F1 steering wheels have become a veritable computer controlled dashboard. Each driver have their wheels custom made to their requirements and have to learn the controls as second nature. The one used in the Red Bull of Verstappen has on its front face, a multitude of buttons and knobs; there are 16 setting/adjustment controls on the front of the wheel including Fuel settings, brake balance and suspensions setting. As well as drinks and radio buttons. On its rear are the paddles that control the clutch, DRS and gear shifts.

The Wheel come in its own custom made plexiglass case with Verstappen’s race #33 printed on its base.

These wheels very rarely come onto the open market and are usually snapped up as soon as they appear. Please don’t wait to acquire this fantastic piece of F1 history.

The controls are deciphered below (also see pictures).

Front of steering wheel controls. 1 DIFF: adjusts the differential. 2 N (“Neutral”): puts the gearbox in neutral. 3 10 / +1: ups or lowers, from 1 to 10, the value of one of the parameters actioned by turning knob number 8. 4 RADIO: Verstappen push this button to talk to his engineer. 5&7 BBAL (“Brake Balance”): changes the brake balance, also adjustable by the buttons BB– and BB+. 6 DRINK: activates the pump, which allows the drive to drink. 8 TYRE: adjusts the car’s settings to the current state of the tyres (following steps indicating the “tyre phase”). 9 CHARGE: defines the amount of energy recuperated or released by the ERS: the driver turns the wheel to the left (“fill”) or the right (“drain”) according to the strategy. 10 FUEL: changes the air/fuel mixture. 11 DISP (for “Display”) : allows the various parameters to be shown on the display: “FORM”, “FUEL”, “TYRES”, “BRAKES”, “TYRES”, “SAFE”, “IN LAP”. 12 MODE: changes the mapping of the engine. 13 REV: probably used to release a temporary boost. 14 MID: adjusts the differential mid-corner. 15 FAIL: puts all the systems in a safety mode (“fail safe”). 16 PIT: pitlane speed limiter. 17 PC (“Pit Confirm”): confirms the message from the pits is well received without having to talk. 18 TORQ: adjusts the torque.

The rear of the steering wheel controls. 1 Paddles controlling the clutch (used only when driving off): there is only one clutch, but two paddles, for ergonomic reasons. Depending on whether the circuit is turning clockwise or not, the driver uses either command. If it is necessary to leave the garage by turning to the right, it will use the pallet on the left, and vice versa. 2 Shift paddles: the driver downshifts by pulling the paddle on the right on the image above and shifts up by using the one on the left. 3 DRS-activating paddles: to open the flap on the rear wing, the Red Bull drivers use a paddle instead of pushing a button, as is the case on the Mercedes and Ferrari cars.