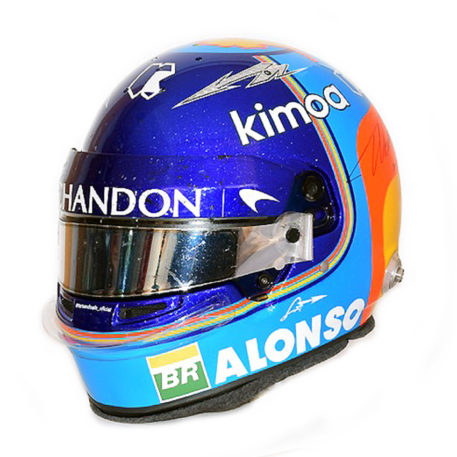 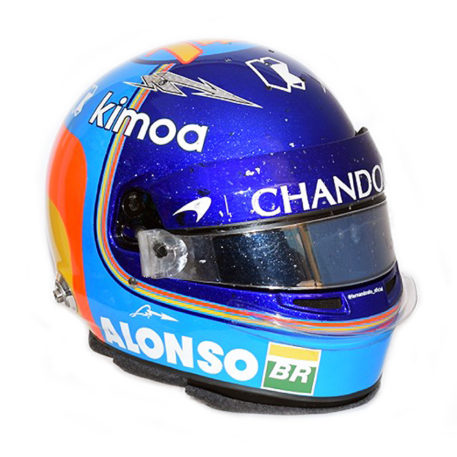 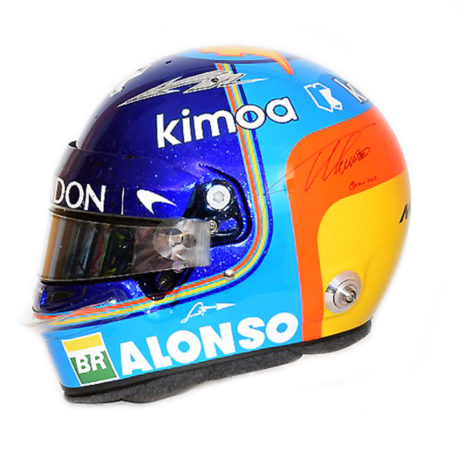 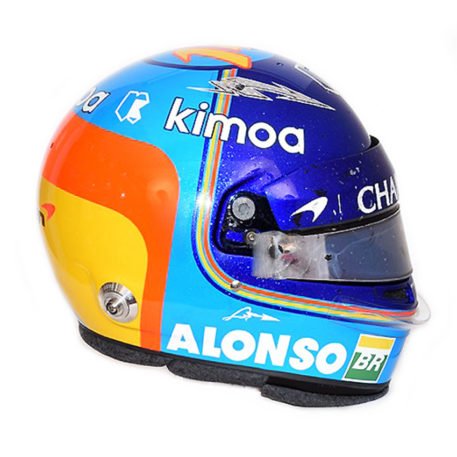 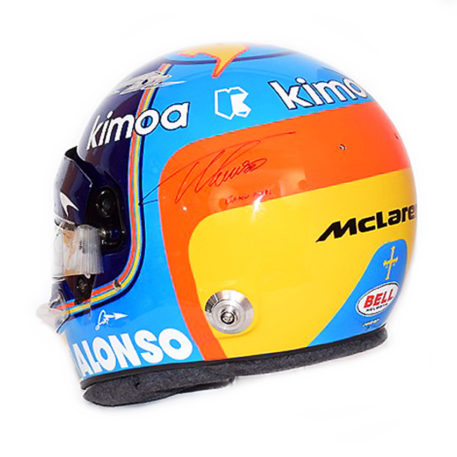 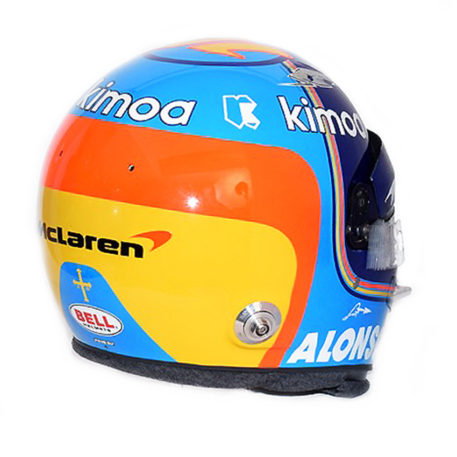 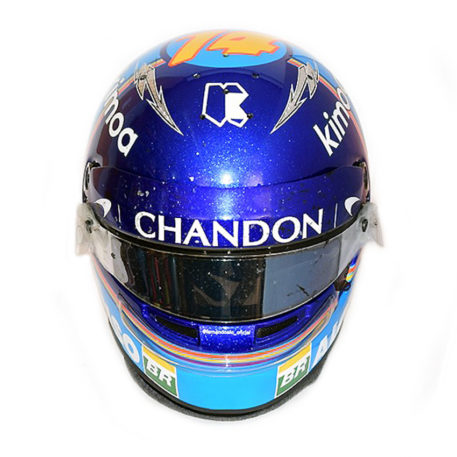 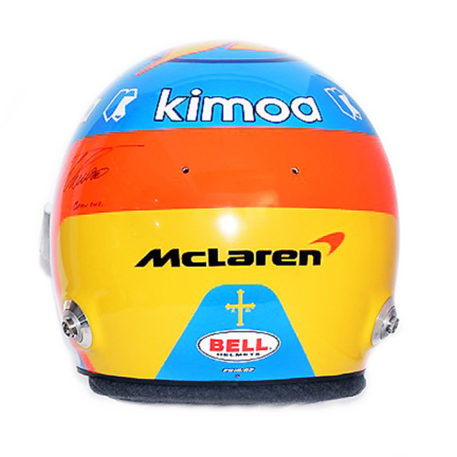 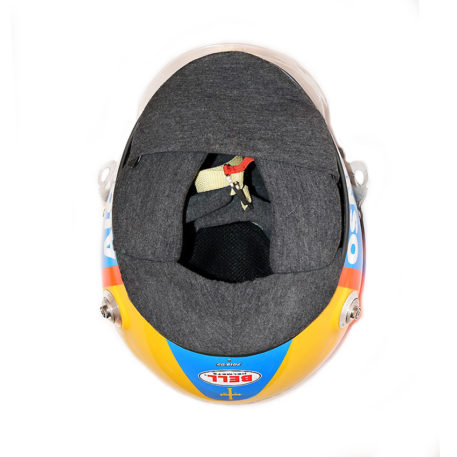 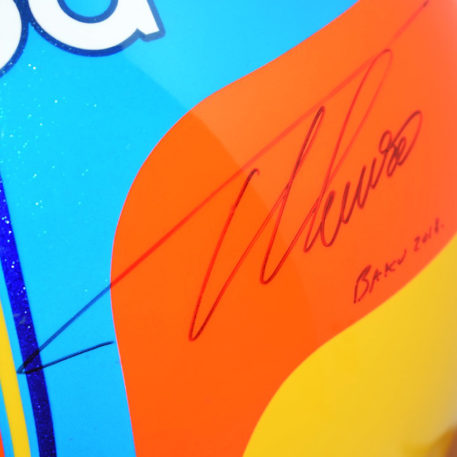 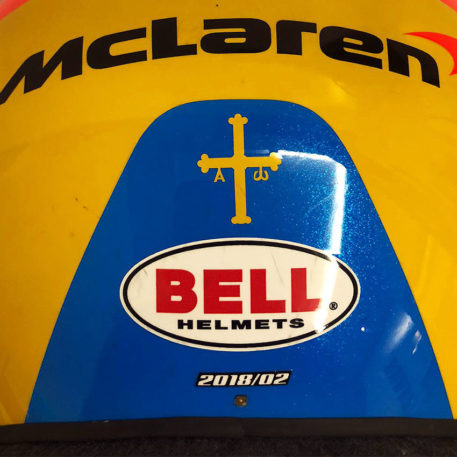 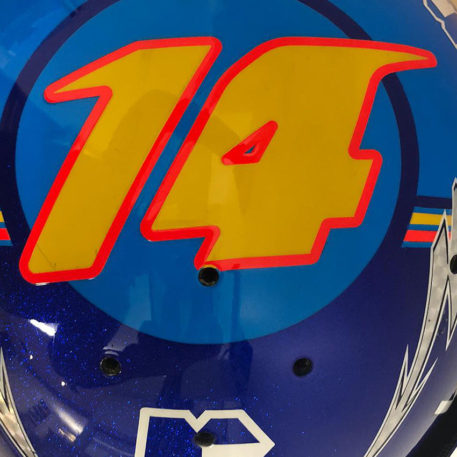 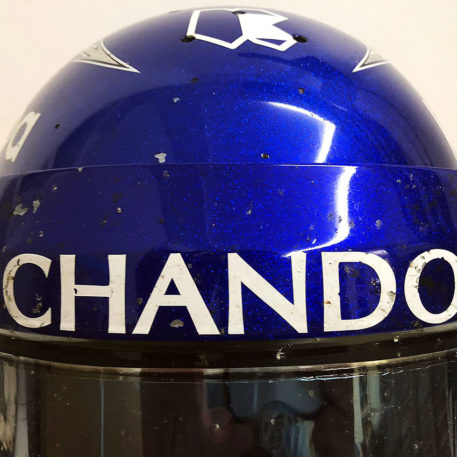 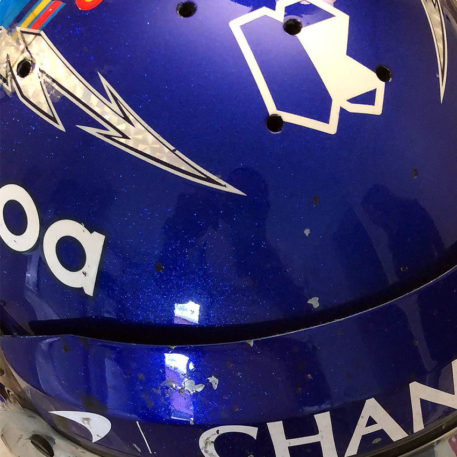 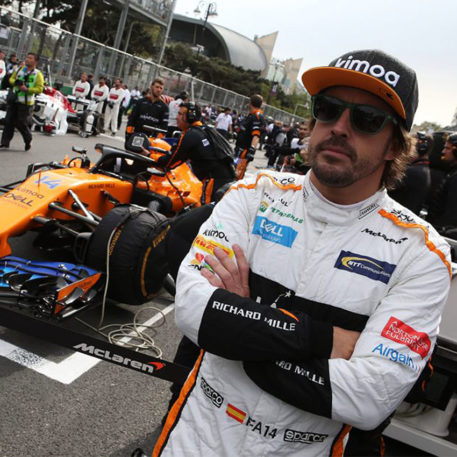 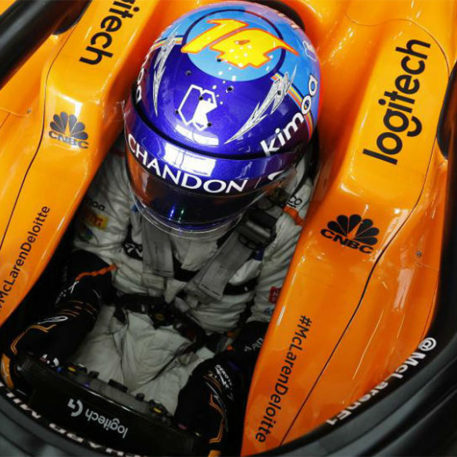 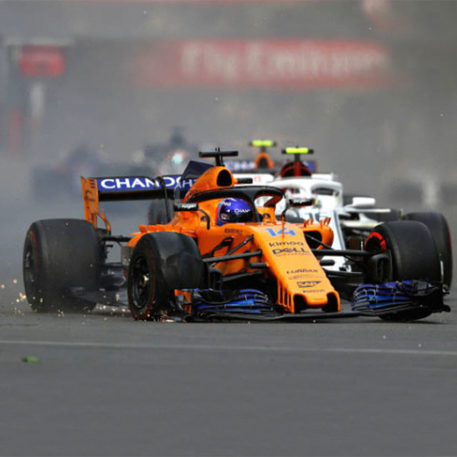 This helmet was worn in what he described as “one of the best races of my life” By two times World Champion, Spaniard Fernando Alonso.

The helmet was used at the opening Grand Prix of the 2018 season in Baku, Azerbaijan. Alonso was caught up in a collision with two other cars between turns two and three on the first lap, suffering punctures in both his right-hand tyres. By the time he dragged the car back to the pits; it was down to its wheel rims and had suffered extensive aerodynamic bodywork damage. The car was virtually undrivable and Alonso hit the wall on the right-hand side when entering the pit lane. The car was now damaged with large hole to the underside floor pan; this caused loss of downforce at both the front and rear. Alonso was not about to give up and radioed to the crew ‘Let’s change the tyres and front wing and go.’ He was sent back out with the wounded car. Alonso then switched his driving style to adapt to the balance of the car. He clawed his way through the field to finish in seventh place, two places in front of his team mate Stoffel Vandoorne who was in an undamaged car. This was one of those truly memorable Formula 1 performances that only a driver regarded by many as one of the greatest Formula One drivers in the history of the sport would have been able to pull off.

The Bell helmet shows all the scars and paint chips of battle and can clearly be seen as the one used for the Baku race. A lighter blue centre section has Alonso’s name and BR decals running around the cheeks. Blue/red/yellow pinstriping divides a metallic dark blue section to the front. The back section has red yellow and blue panels. On the blue panel is the Bell logo and date ‘2018/02’ and a yellow Asturias Cross of the Angels. The yellow panel has a McLaren logo. The helmet is topped off with Alonso’s race number ‘14’ and logo decals of Spanish clothing retailer ‘Kimoa’. The visor strip has Team sponsor French winery ‘Chandon’ logo added to it.

The helmet has been autographed and race documented and dated by Fernando Alonso.

A full Certificate of Authenticity will accompany the helmet.

This is a very rare opportunity to acquire this fantastic piece of memorabilia that was used in such outstanding performance by a world champion driving in his last season in Formula 1.