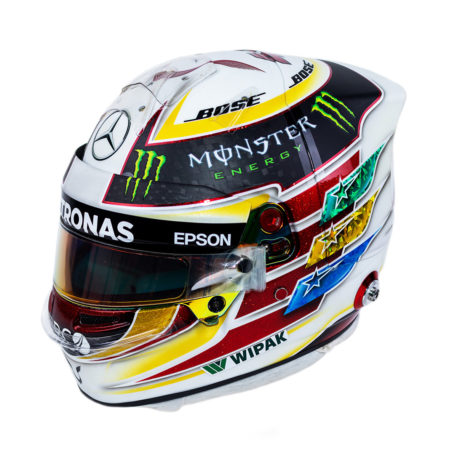 Lewis Hamilton’s 2017 AMG Mercedes F1 original Bell helmet.  Hamilton would win 9 races in the 20 round 2017 season and would go on to capture his fourth Drivers’ Championship.  Mercedes won their 4th consecutive World Constructors title as a result of Hamilton and team mate’s efforts. His closest rival, Sebastian Vettel, would place second in the Drivers’ Championship that year.

This impressive helmet has a white base with bands of yellow, black, and red running horizontally from front to back. The Mercedes ‘Star’ emblem features prominently on the top front and his emblem is painted on the very top as well. ‘HAM’ is painted on the back in the red band that runs across the back of the helmet and below this is the now famous ‘Still I Rise’ script that has become synonymous with Hamilton. Various sponsors’ branding logos are painted on the helmet including Monster Energy, Bose and Wipak. The Petronas and Epson logos are placed on the top of the visor.