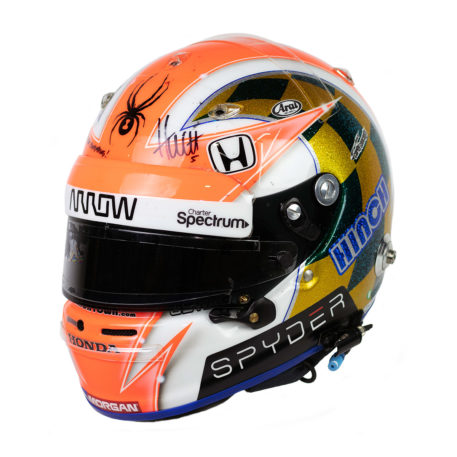 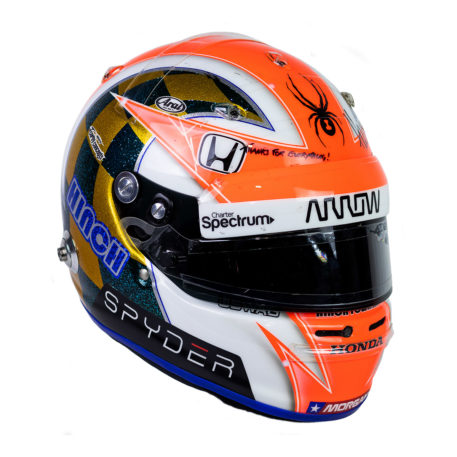 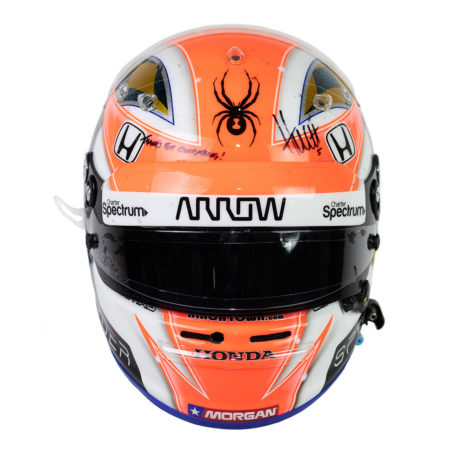 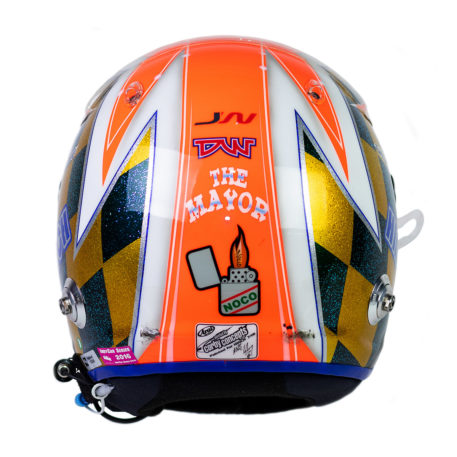 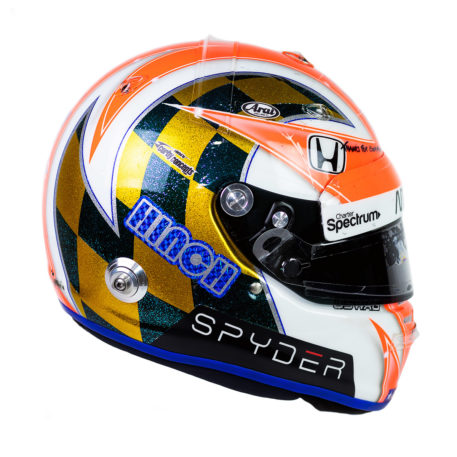 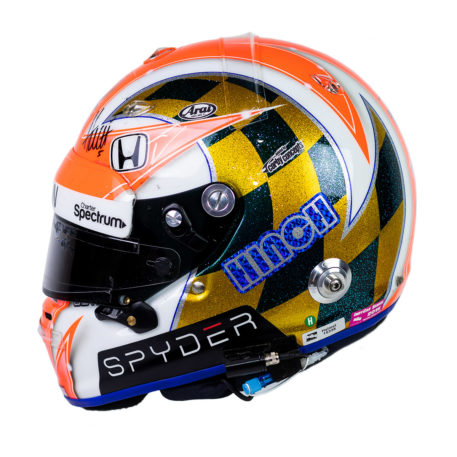 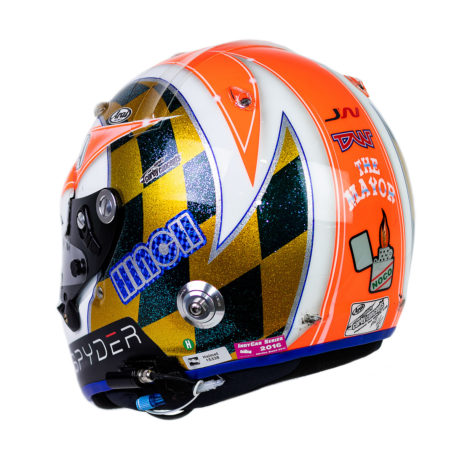 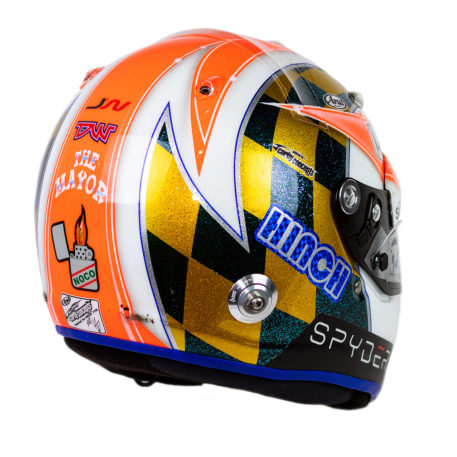 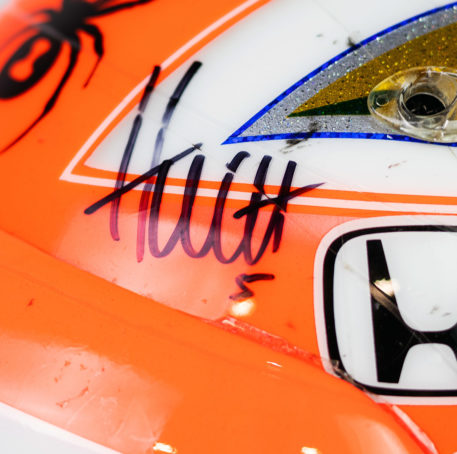 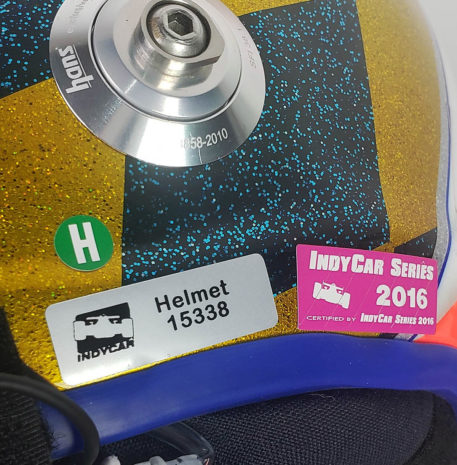 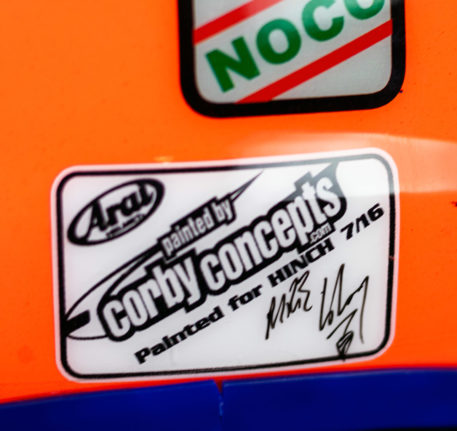 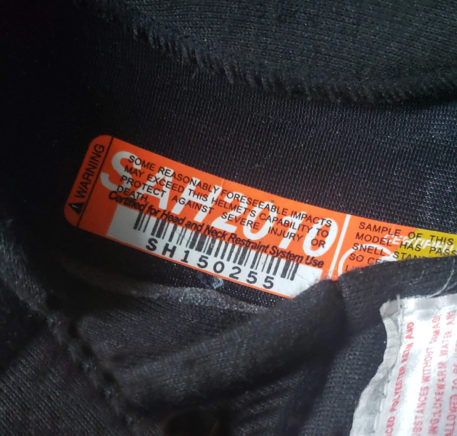 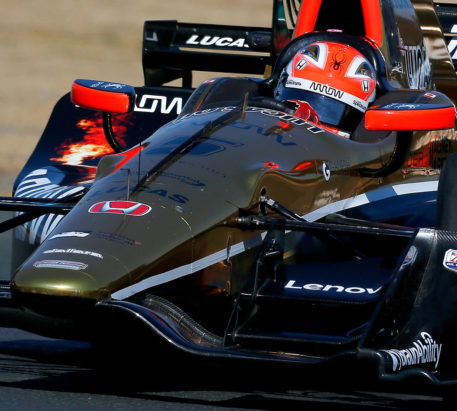 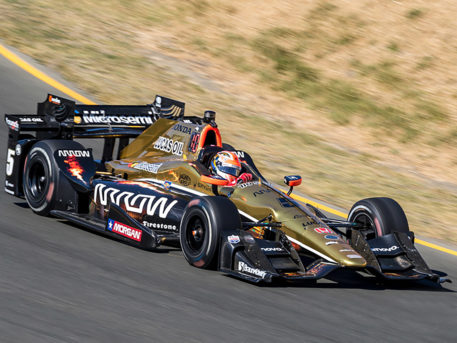 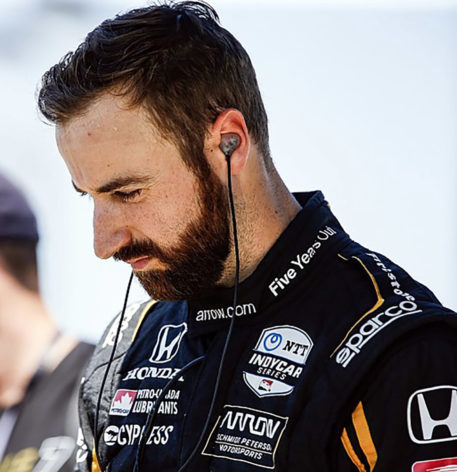 This James Hinchcliffe Arai GP-6 helmet was race used at the 2016 GoPro Grand Prix of Sonoma. Coming back from his almost career and life ending 2015 crash, Hinchcliffe driving for Schmidt Peterson Motorsports scored two 3rd place finishes at Indianapolis and Toronto in the 2016 season. The big highlight was his Pole Position run almost 1 year to the day after his crash at the 100th running of the Indianapolis 500.

This helmet painted by Corby Concepts has a wide fluorescent orange arrow running over the top (back to front) and has a white band either side. There is a scalloped metallic gold and blue edged in silver design to both sides of the helmet which is in tribute to his hero Greg Moore’s helmet design.  Hinchcliffe’s abbreviated ‘Hinch’ name in blue and silver is also overlaid on the design. There is a black panel to either cheek which have sponsor ‘Spyder’ ski equipment lettered logos. To the back of is an image of a lit ‘zippo’ lighter, above this is Hinchcliffe’s ‘The Mayor’ moniker and a Dan Wheldon and Justin Wilson ‘DW/JW’ stickers in respect of the two late drivers.  Other sponsors/suppliers brandings have been added to the helmet including, Honda, Arrow, Morgan and Charter Spectrum. The helmet has also its original “Hats Off” system sill installed and its Indycar series tech and helmet stickers attached.

The helmet has been personally signed with a “thanks for everything” message by James Hinchcliffe and will be accompanied by a full Certificate of Authenticity.

Please see our other listings for many other James Hinchcliffe race-used items.

Hinchcliffe’s race worn items are few and far between so don’t miss out on this very rare opportunity to own such a special helmet today.