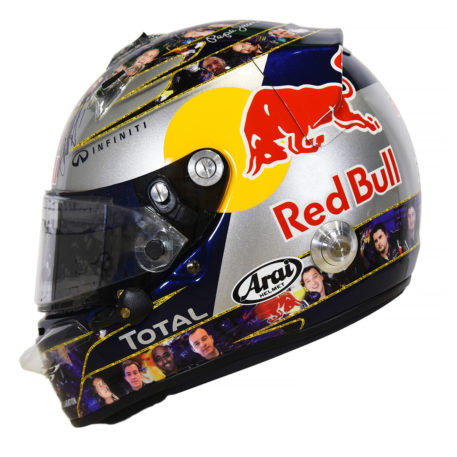 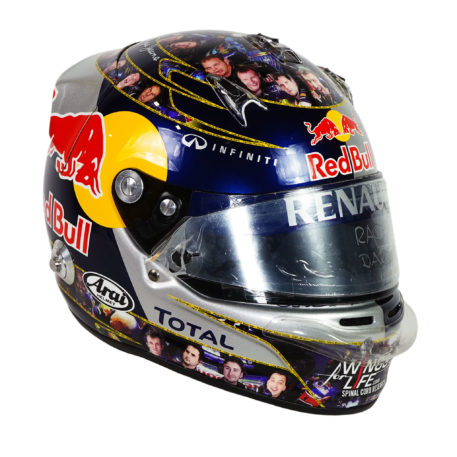 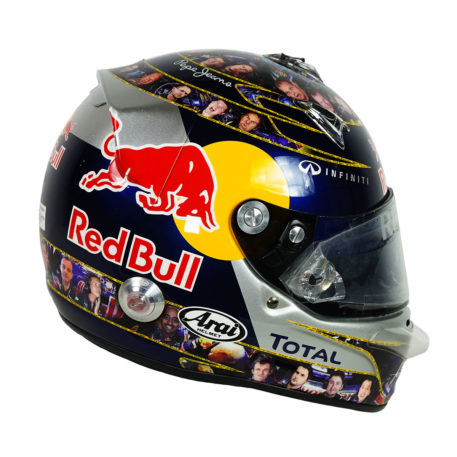 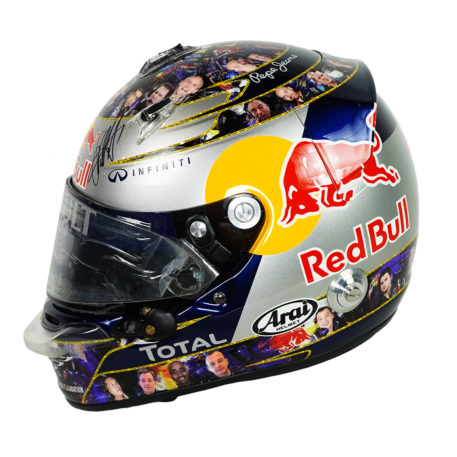 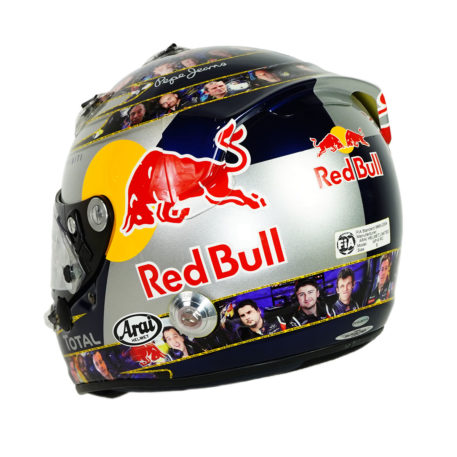 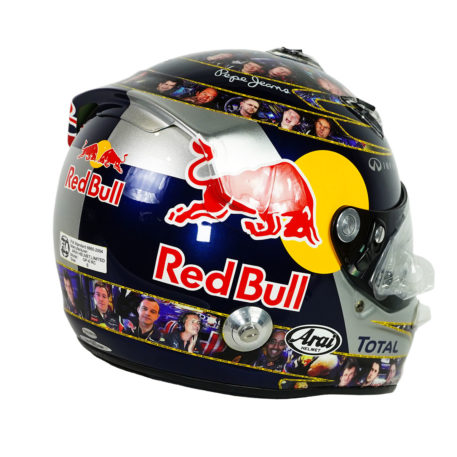 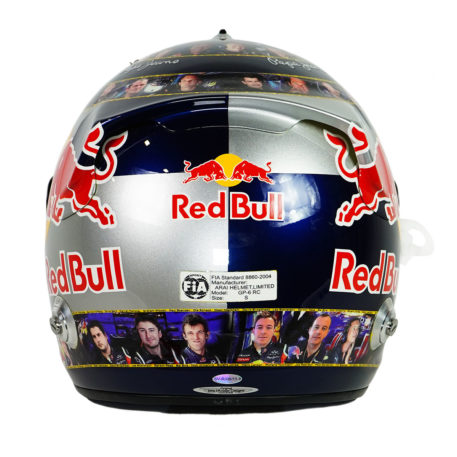 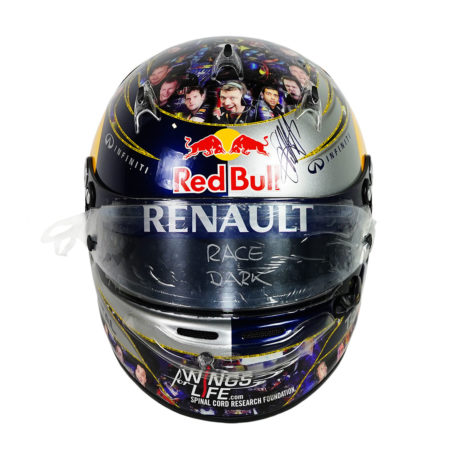 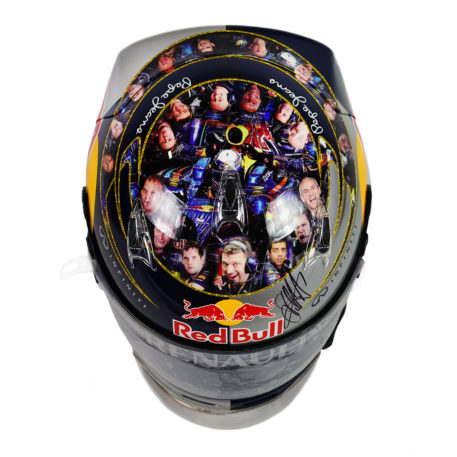 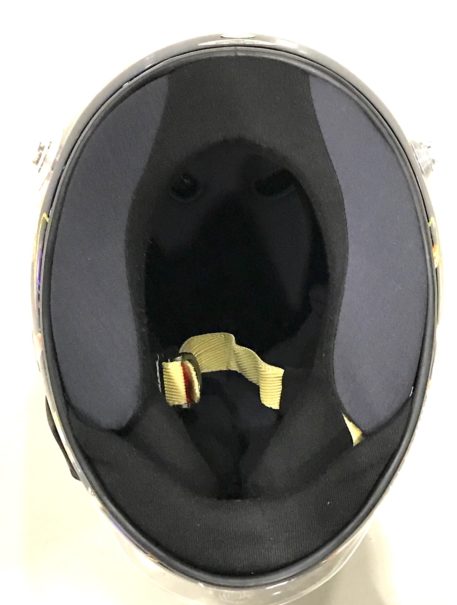 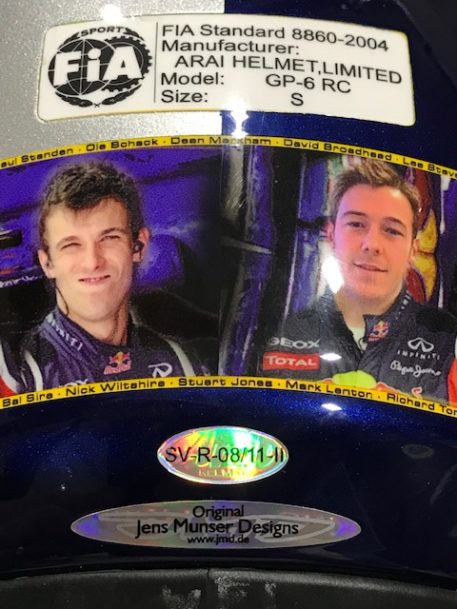 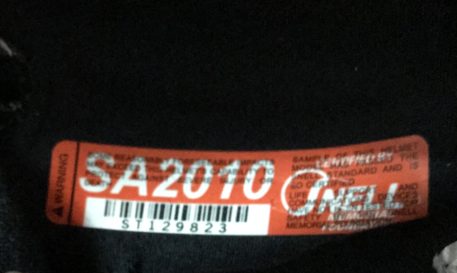 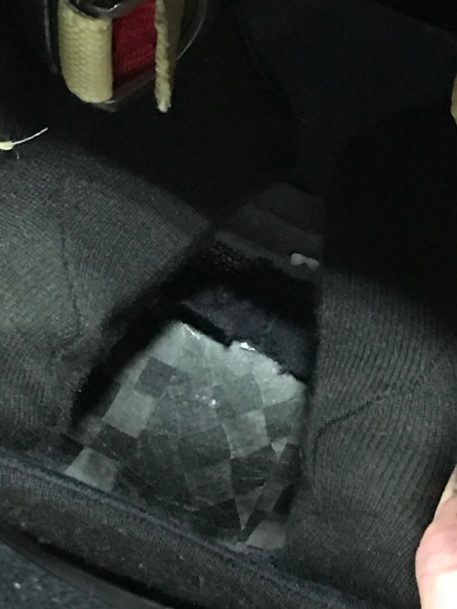 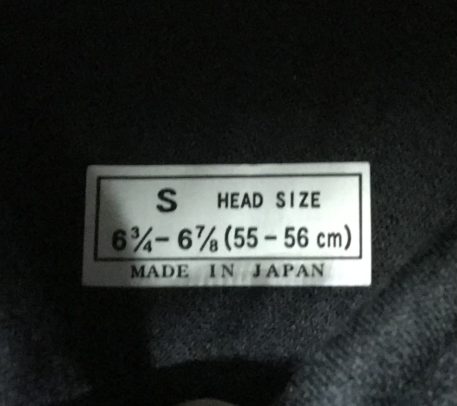 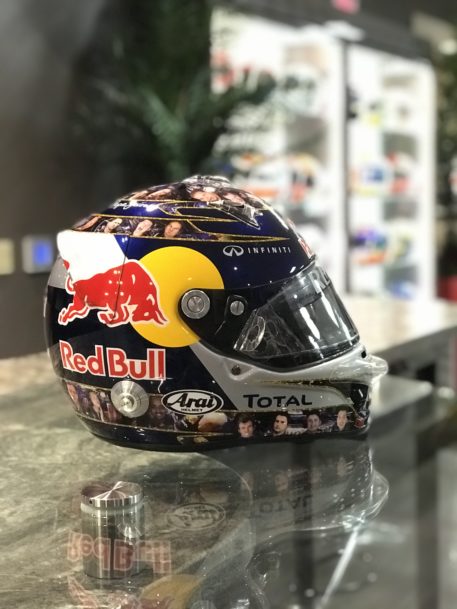 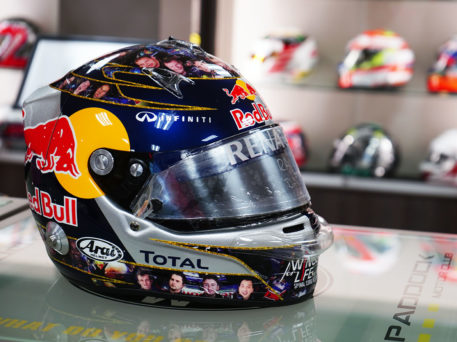 This stunning Sebastian Vettel Arai Grand Prix used helmet is one of only two identical helmets designed and painted by Jens Munser. Vettel used these helmets at two Grands Prix during his charge to the 2011 Formula One Championship title. The German Vettel, driving for Red Bull Racing, gave this design its first run at the team’s home British Grand Prix where he finished second. Vettel used the helmet again for the inaugural Indian Grand Prix, where he took his final win of the season. Vettel, who was defending champion, was totally dominant throughout the 2011 season finishing every race, except for two, on the podium. Eleven wins, five seconds and a third-place gave Vettel a total of 392 points, a staggering 122 points more than his nearest rival Jenson Button. This would be the second of Vettel’s four titles which he won over four successive years, becoming the youngest double, triple and quadruple world champion in Formula One history in the process.

The design has Vettel’s standard Red Bull silver & blue quarter panels running around the helmet. The Red Bull Energy Drinks ‘Charging Bull’ branding logo features prominently on the front, back and sides. In addition, there are portrait pictures and names of all of Red Bull Racing’s team personnel on the helmet’s crown and on both the upper and lower surrounding bands. This was done in tribute to the team’s workforce that helped capture back-to-back Driver’s and Constructors’ Championships. It also has the ‘Wings for Life’ lettering on the chin, as well as other sponsor/suppliers’ logos applied including Total, Pepe Jeans and Infiniti.

Vettel, who is known to keep all of his race-day helmets, would have used this particular helmet in the practice and qualifying sessions at the two Grands Prix mentioned above. It has been definitively photo-matched being used at the Silverstone practice sessions. It has since had a dark race visor attached and its race radio and front chin pad removed. It does still retain its HANS fittings, chin and rear air spoilers and all vent covers. On its rear is the Arai FIA standard sticker as well as the two oval Jens Munser Designs stickers, one of which is the hologram helmet I.D. sticker which reads SV-R/08/11-II.

The helmet has been personally signed by Sebastian Vettel and is accompanied by a full Certificate Of Authenticity.

This is a very rare opportunity to own a highly sought-after and very hard to come by Sebastian Vettel Grand Prix worn helmet.