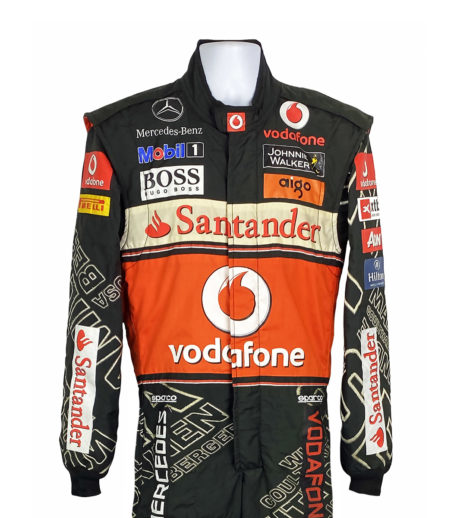 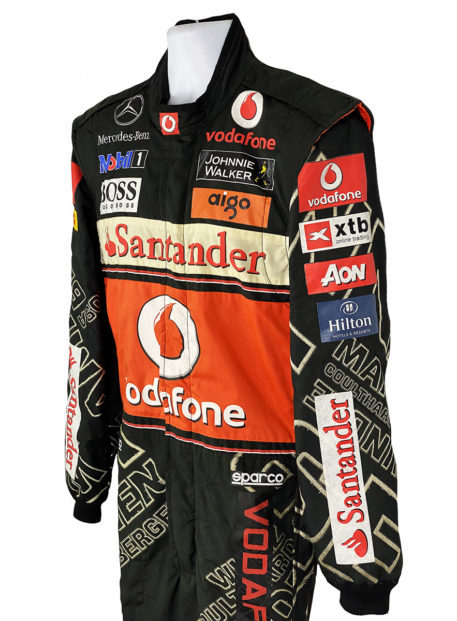 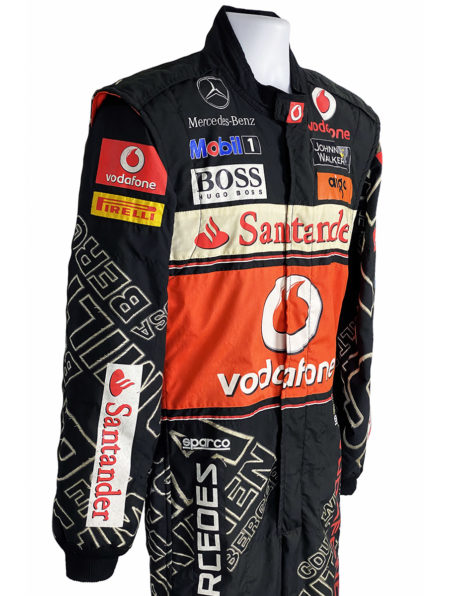 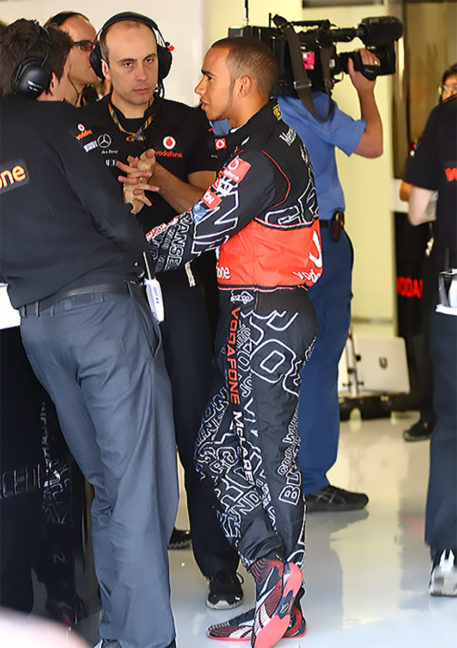 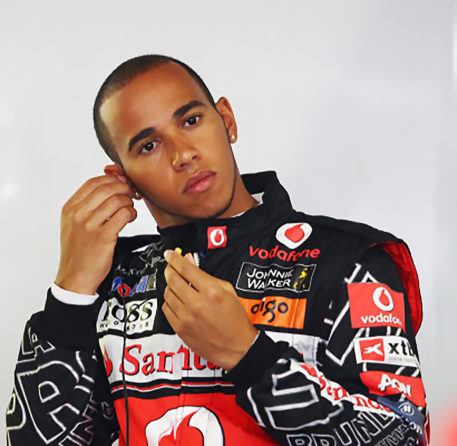 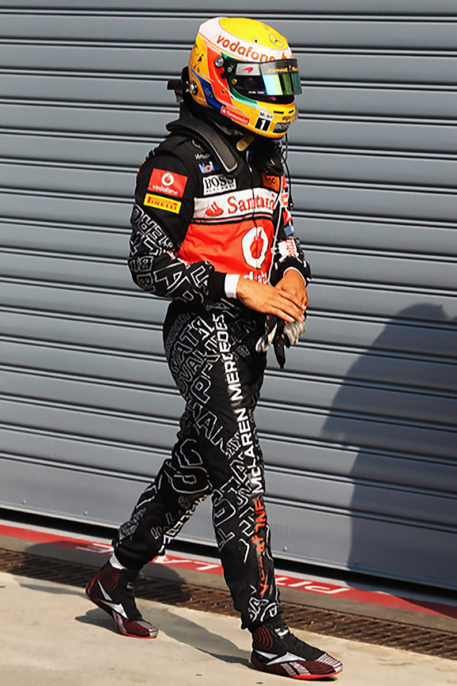 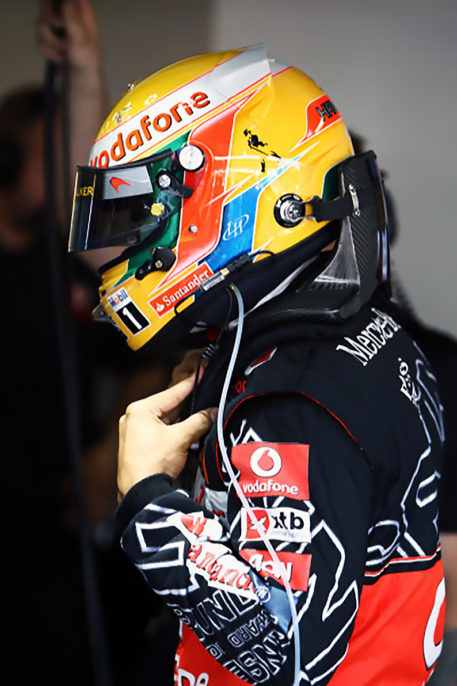 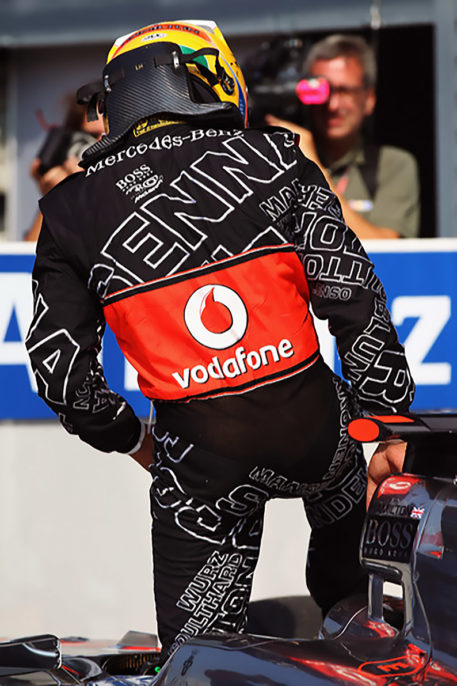 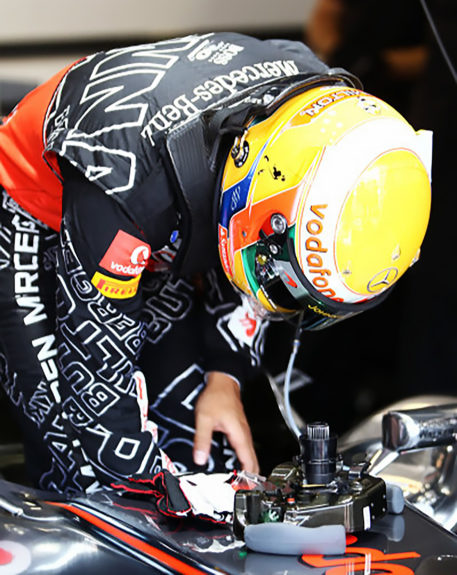 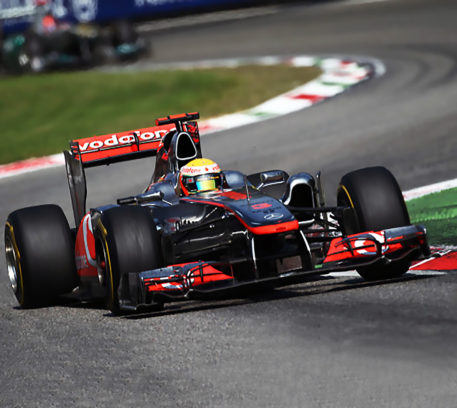 2011 marked a 30-year sponsorship deal between the McLaren F1 team and German clothing manufacturer Hugo Boss. The Hugo Boss logo has appeared on the bodywork of the cars and featured on drivers’ and team members’ uniforms extensively throughout the three decades. To celebrate this relationship Hugo Boss would run a competition that involved inviting participants/fans from across the world to design the McLaren F1 stars’ racing suits on the Hugo Boss website. Fans from each country that hosted a Grand Prix were asked to submit their designs with one design being picked and manufactured for qualifying in that country’s F1 race. Both Lewis Hamilton and Jenson Button used these race suits at each Grand Prix, with an end of season fans’ choice of the best suit design from the previous eighteen races being used again for the final race in Brazil.

This race suit design was the one selected to be used by the drivers at the Italian Grand Prix. It would also be chosen as the overall winning design that was then used again for the last race in Brazil. This particular suit is the actual one Lewis Hamilton wore during the Saturday’s qualifying at the Monza circuit. Hamilton qualified second on the grid and would drive his McLaren MP4-26 to a fourth-place finish.

The black Sparco suit features the names of many of the race drivers that had driven for the McLaren team during this 30-year period, which includes the names of Senna, Prost, Mansell, and Lauda. There is a thick red band around the torso with team main sponsor Vodafone’s logo and just above this on the front is a smaller cream color band which has the Santander branding logo. Running down both legs is Vodafone McLaren Mercedes lettering. The back shoulders of the suit also have Mercedes lettering. Both arms and chest have many other team sponsors/suppliers’ printed trademarks including Aigo, Johnnie Walker, Hilton, and, of course, Hugo Boss.

This is a fantastic opportunity to acquire this one-of-a-kind, race suit worn by the six-time F1 World Driving Champion. This suit is probably one of the rarest Lewis Hamilton race suits ever produced made available to date.

The suit comes complete with a full Certificate Of Authenticity.