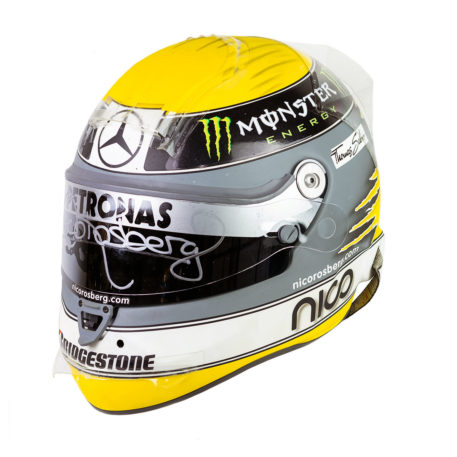 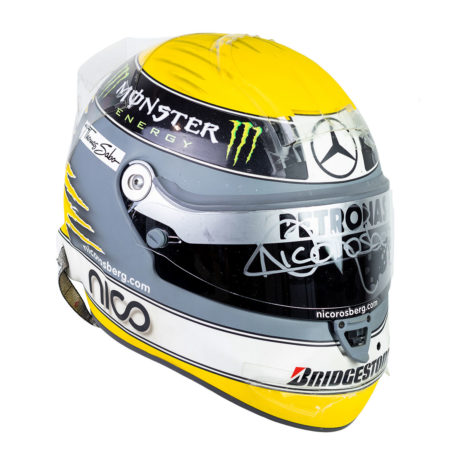 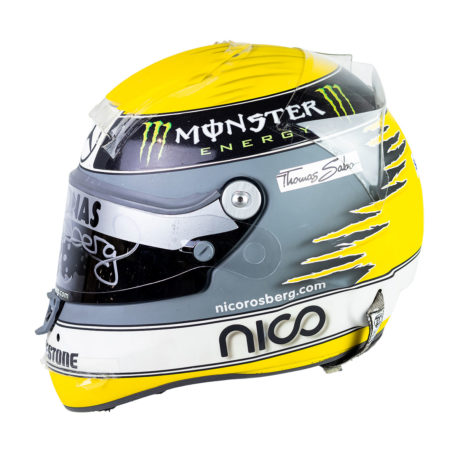 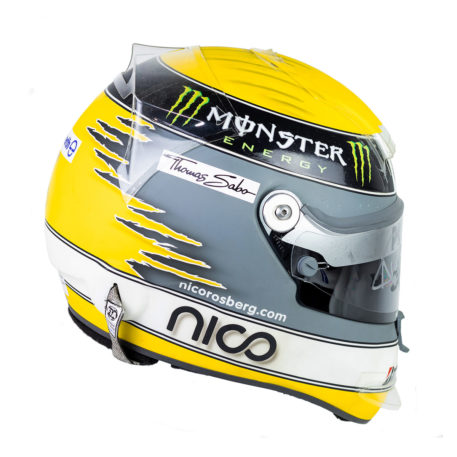 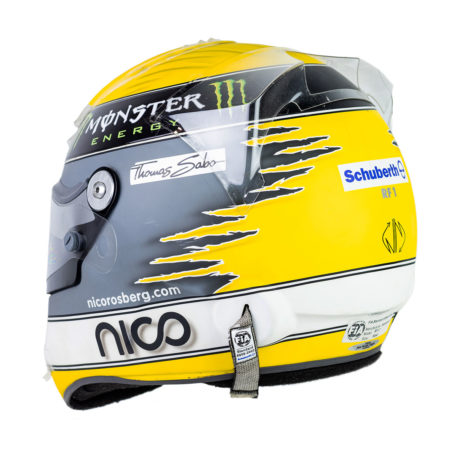 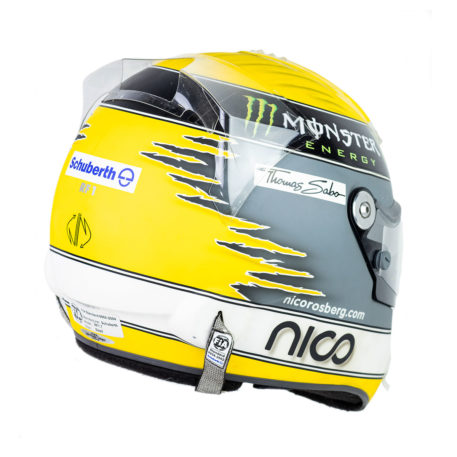 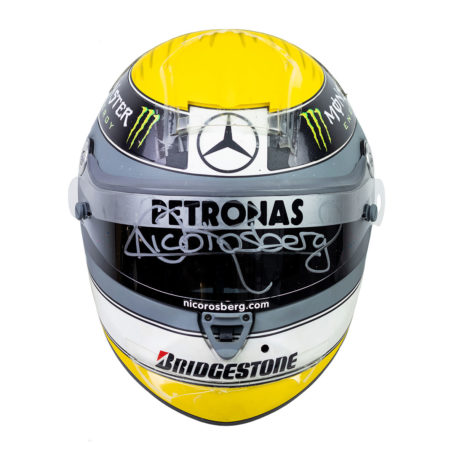 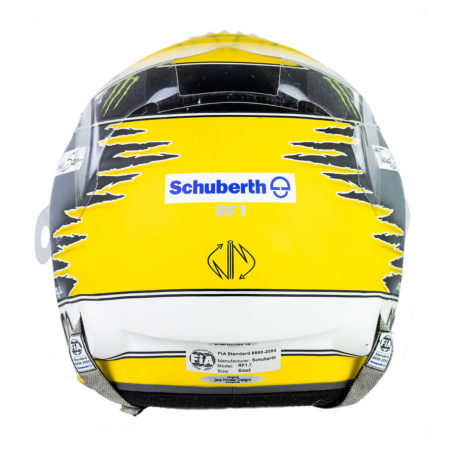 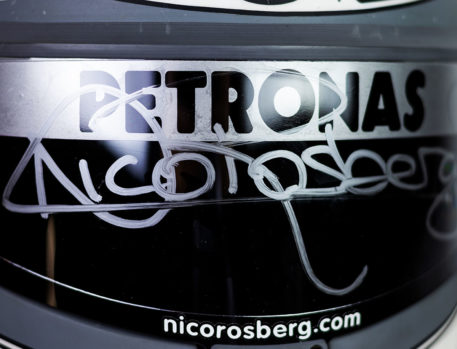 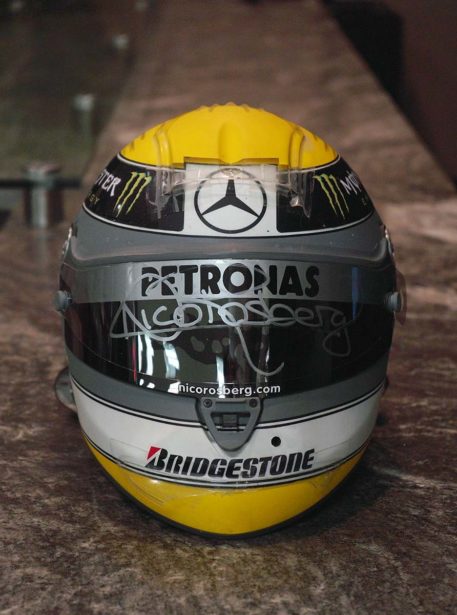 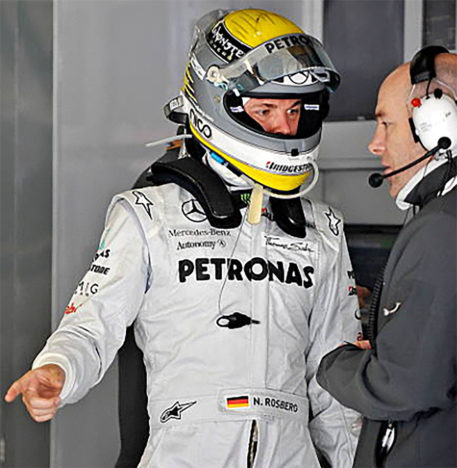 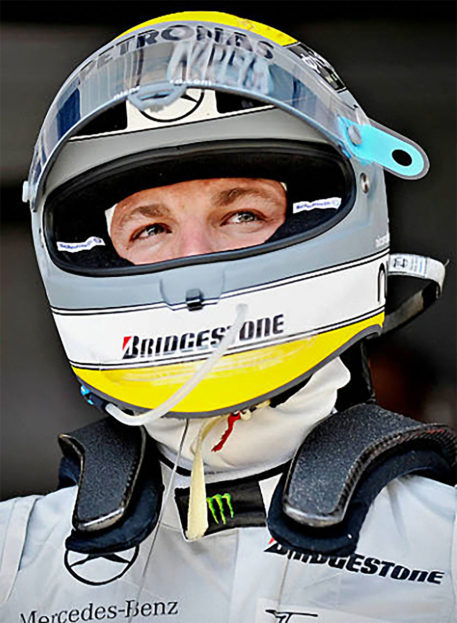 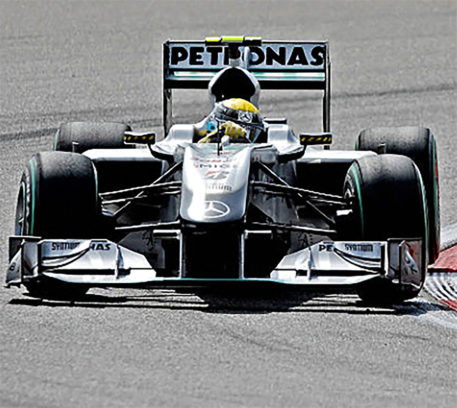 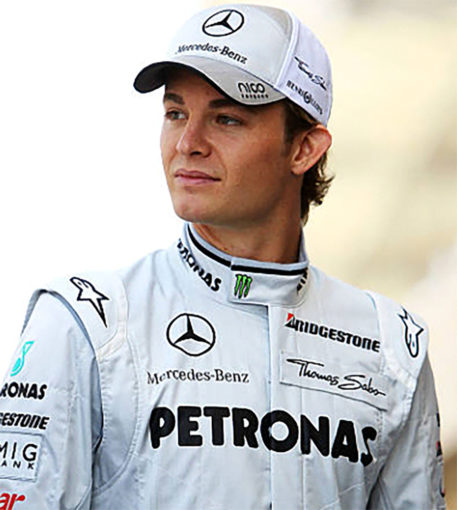 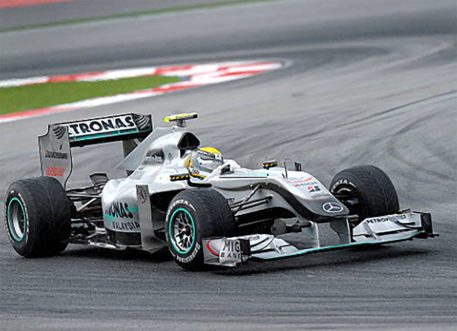 Race used Schuberth RF1 Helmet worn by former F1 World Champion Nico Rosberg. The German driver used this helmet while in his first season with the Mercedes GP Petronas F1 Team in 2010. This was also the first season for the Mercedes GP team after the Daimler AG Company purchased the Brawn GP racing team at the end of the 2009 season. Rosberg would be teamed up with former seven-times World Champion Michael Schumacher.  With both driving the Mercedes MGP W01, Rosberg would go on to having a very promising season with the fledgling team finishing in the points in fifteen races and scoring podiums three times. He battered his more famous teammate at most races and out qualified him in 15 races out of 19 on the season. Rosberg, the son of 1982 F1 World Champion Keke Rosberg, spent the rest of his career with the Mercedes team, winning the F1 title in 2016, and then very publicly announcing his retirement from competitive racing one week later.

This helmet, which has been photo matched to one being used at the Chinese Grand Prix (where he would finish third), would have also been used at several other Grand Prix weekends. This Jens Munser painted helmet has a bright yellow crown and a band running around its bottom. There’s a wide matte finish grey band around its middle that has torn- edged ends toward the back of the helmet that convert to bright yellow. Around its bottom half is a white band the has the ‘Nico’ name on each side. A black band on the top portion of the helmet has Monster Energy sponsor decals applied to it. On the front of the helmet is the Mercedes ‘Three Pointed Star’ as well as other branding decals from Bridgestone (chin) and Thomas Sabo (sides) that have been applied. The helmet comes as it was last used with Hans straps, aero fittings, vent covers still attached and heli tape still applied. The visor has a Petronas sun strip and a tear-off attached as well. It also has its FIA standard sticker, as well as two silver oval Jens Munser stickers, applied on the back. The Munser helmet I.D. sticker reads R-NR 047/03-10.

When it comes to collecting F1 World Champions’ items few are rarer than helmets from Nico Rosberg. The German driver is well known for keeping all of his race helmets and never giving any away from his racing career. We are very fortunate to have acquired two of them and expect such a wonderful helmet from this recent World Championship winning driver to sell fast. The helmet also has a beautiful “full signature” from Rosberg which is also extremely rare since his signature changed quite a lot as his popularity grew .

Don’t miss this great opportunity to acquire this collectable, rare and fabulous looking helmet race-worn by the 2016 World Champion.