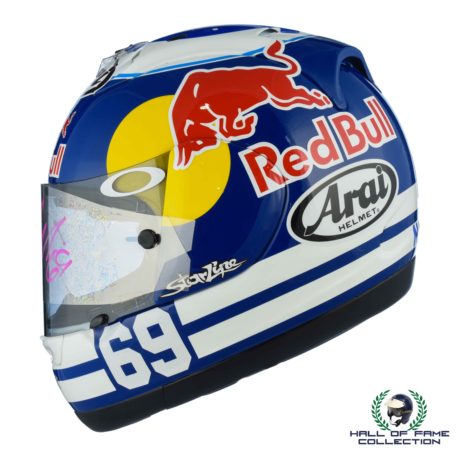 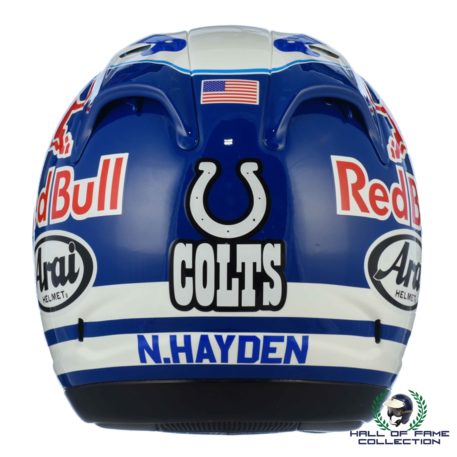 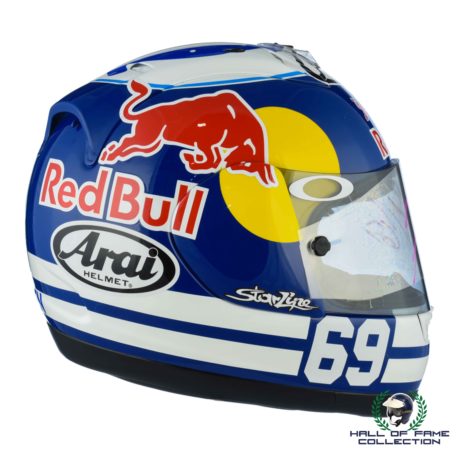 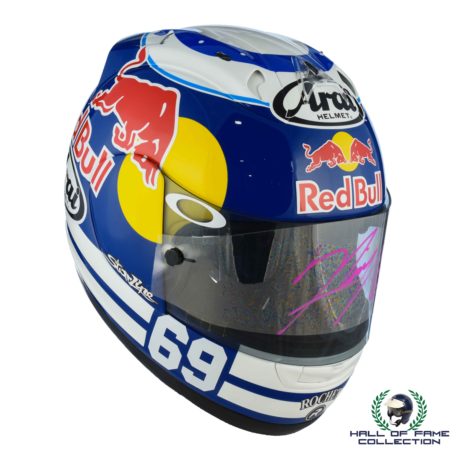 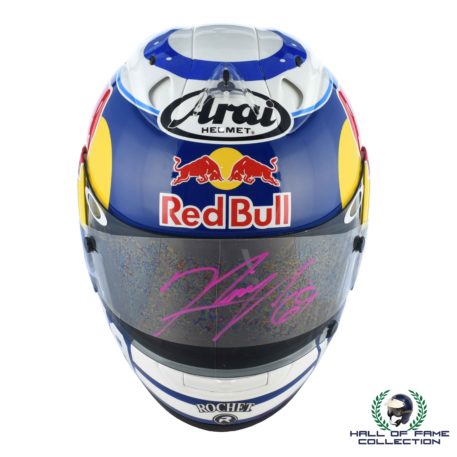 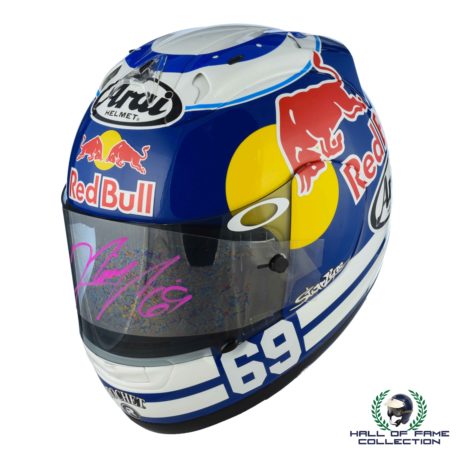 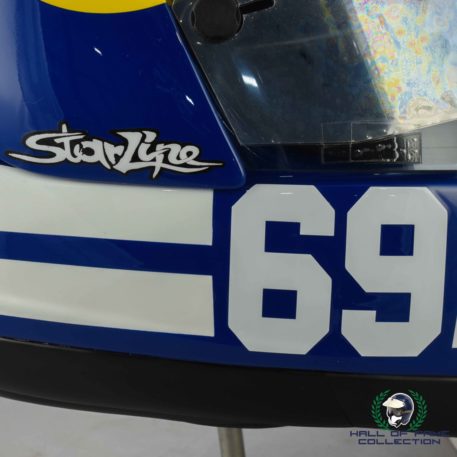 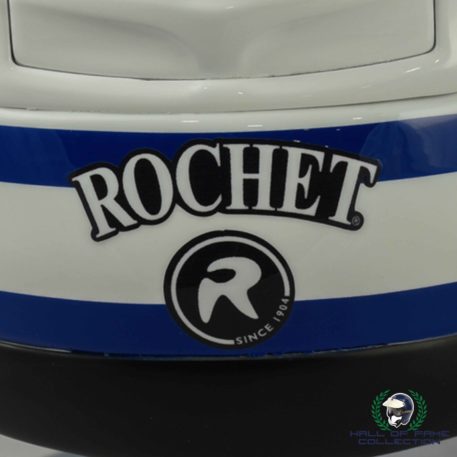 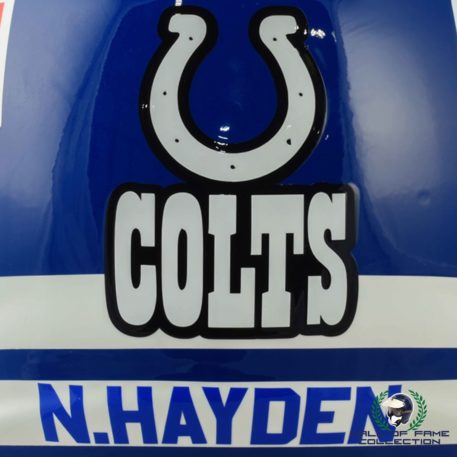 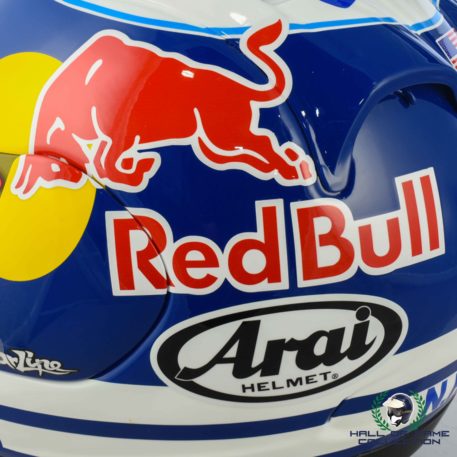 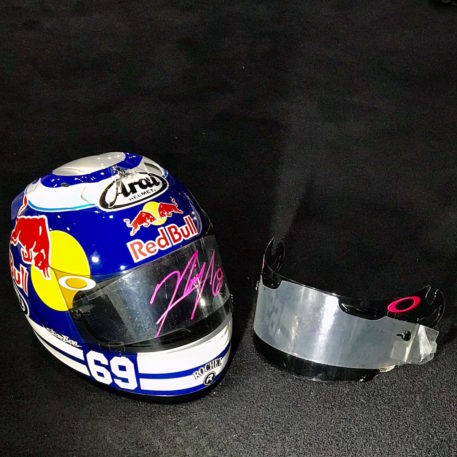 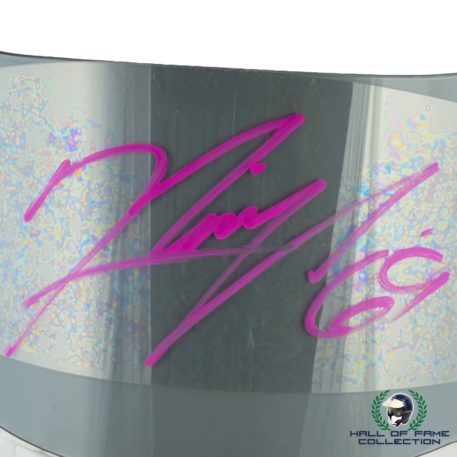 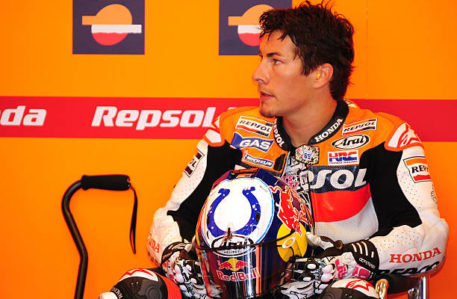 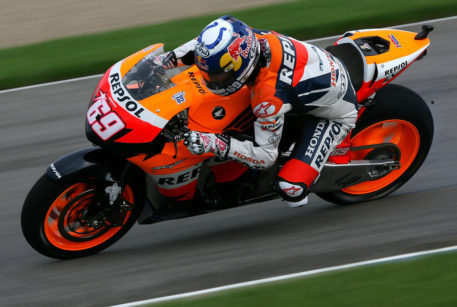 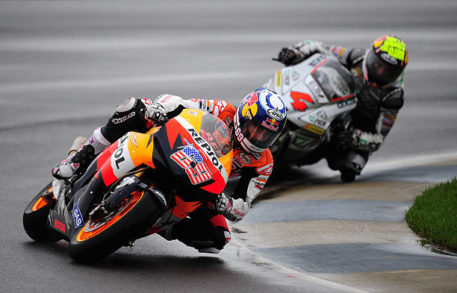 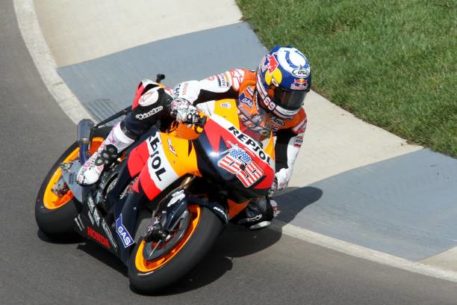 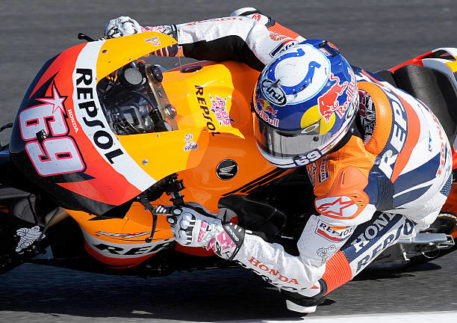 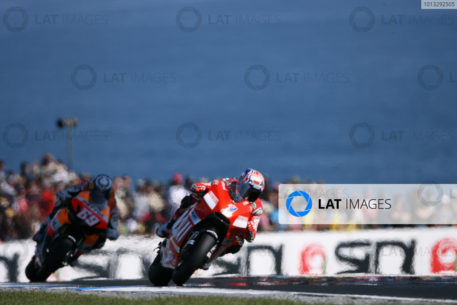 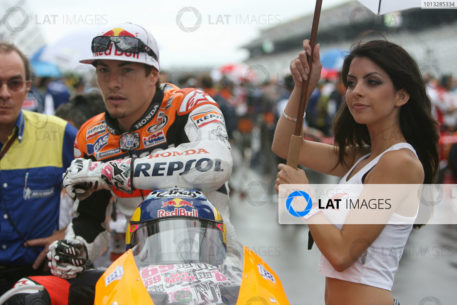 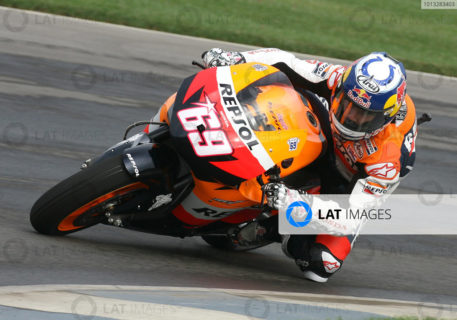 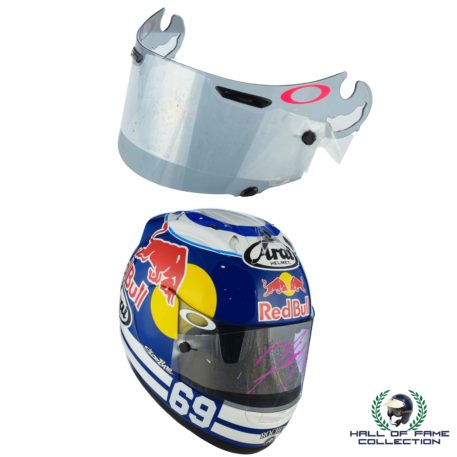 Original Arai Corsair V helmet made for American Nicky Hayden during the 2008 MotoGP season. This spectacular helmet was painted by Starline and is unique in that this particular design was worn by Hayden in only 2 MotoGP races, Indianapolis and Australia, as well as having the Indianapolis Colts football team’s emblem on the top of the helmet. Starline confided only two helmets were ever painted.

Hayden, nicknamed “The Kentucky Kid”, was a professional motorcycle racer who began racing motorcycles at a young age. He began his road racing career in the CMRA before progressing to the AMA Supersport Championship and then to the AMA Superbike Championship. He won the AMA title in 2002 and was then approached by the Repsol Honda team to race for them in MotoGP. In his first season he performed well, finishing fifth in the championship and winning the Rookie-of-the-Year award. 2006 would be Hayden’s greatest in motorcycle racing as he won the 2006 MotoGP world title, breaking Valentino Rossi’s five-year consecutive win streak. Hayden was the last American rider to win the premier class in Grand Prix Motorcycle Raing. He remained with Honda for two more seasons before moving to Ducati in 2009.

At the inaugural Indianapolis race in 2008, he would go on to finish second—his first podium of the season. Hayden started fourth but moved his way up the order, overtaking Valentino Rossi, who had fallen back from pole to fourth position at the start, as well as overtaking his future Ducati teammate Casey Stoner and rookie Andrea Dovizioso on the second lap to take over the lead. After Rossi fought his way back up to second, he would overtake Hayden under wet and tricky conditions down at the main straight on lap 14. With the rain increasing, Hayden started struggling and almost lost second place to the charging Jorge Lorenzo, until the marshals red-flagged the race with seven laps to go.

Hayden’s second and last podium of the season, and of his Honda career, would come at the race in Australia. Hayden qualified third while home hero Stoner took pole position. When the lights went out, Stoner was challenged by the ‘Kentucky Kid’ for 10 laps, before the Australian started to pull a two-second advantage halfway through the race and a 6.5 second lead at the chequered flag. Hayden, still in second place at the time, was facing a late charging Valentino Rossi, who had worked his way up from 12th after a high-speed qualifying fall on Saturday. Hayden fought hard to keep second place, but ultimately couldn’t prevent Rossi from taking it on the final lap.

This helmet was most likely kept as the back up helmet and it comes fitted with an original signed race worn visor and a spare anti fog half tint used visor.

Hayden memorabilia is very popular and becoming more and more rare as the years go by so do not miss this rare opportunity to add this fantastic helmet to your collection today.