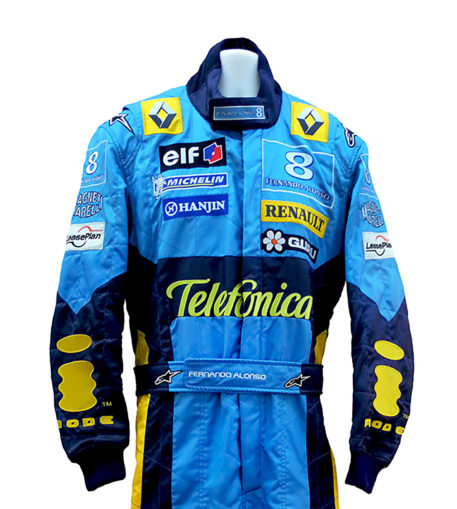 This fabulous Renault race suit is an official display replica of a one worn by Fernando Alonso, while driving for the Mild Seven Renault F1 Team in 2004. This was his second season with the team where he piloted a R24 V10. This suit is a duplicate of one Alonso would have used at a non tobacco advertising event. The Mild Seven tobacco branding has been replaced by Alonso’s name and his race number 8. The AlpineStars light blue with dark blue and yellow trim has many other embroidered sponsor/suppliers logos applied to the including Elf, Hanjin and Magnet Martello.

This official replica race suit was produced for and used by Mild Seven Renault as a corporate display piece at various tracks during the 2004 FIA Formula 1 World Championship. The suit was then auction off for charity once the season ended.
This suit would look great being displayed as a centre piece in any collection and is available for far less than the value of a authentic race used Alonso suit.