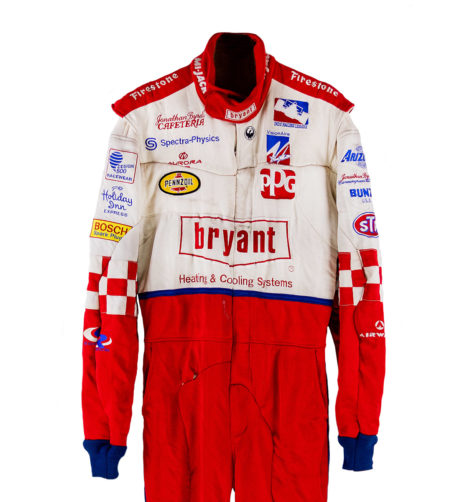 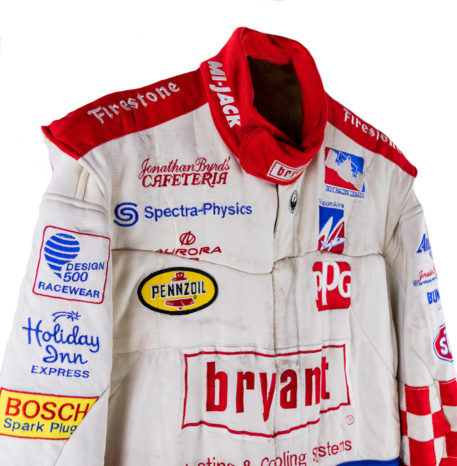 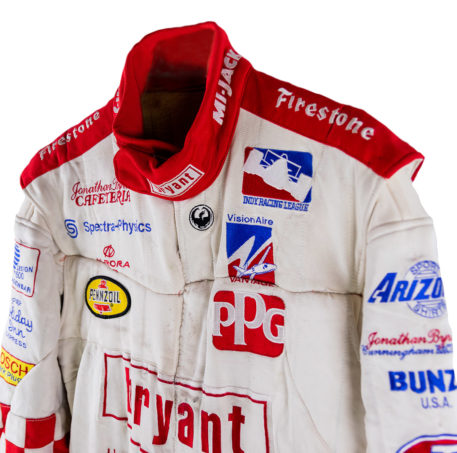 Race suit worn by American driver Mike Groff  in a practice session for the 1997 Pennzoil 200 at the New Hampshire International Speedway, during which he had a serious accident. A former Indy Lights Champion, Groff drove four full seasons and had many one-off races in the CART IndyCar Championship. He was one of the first drivers to be recruited, by A.J. Foyt’s team, to drive in the newly formed 1996 Indy Racing League.

In 1997 Groff was having a good season driving for the Byrd/Cunningham Race Team and managed to capture 3 straight top-five finishes, including two podiums. He then had two serious accidents, the first coming at the super-fast Texas Motor speedway. Groff, the championship point’s leader at the time, hit the outer wall and a piece of the suspension penetrated the car’s tub piercing and fracturing Groff’s leg. This injury would only keep him sidelined for one race, but disaster would strike a second time during practice in New Hampshire. Once again Groff’s car collided with the wall and he would suffer serious head trauma as a result.  He was knocked unconscious, suffered a serious concussion and was forced to miss the remainder of the season.

This is the Byrd/Cunningham suit that Groff was wearing on the day of the New Hampshire accident. The suit was cut away from the unconscious Groff in the medical center, by the staff, in order to do a full examination. The suit has since been stitched back together. Fortunately, Groff made a full recovery and was ready to take his rightful place on the grid the following season.