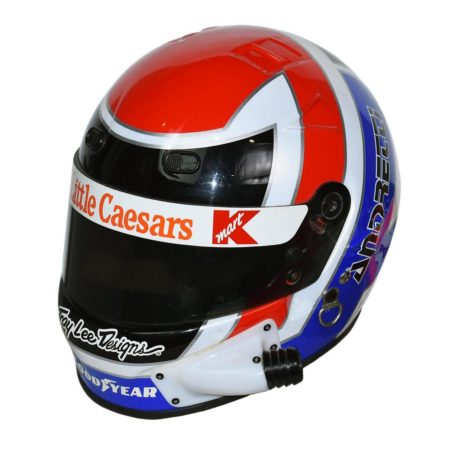 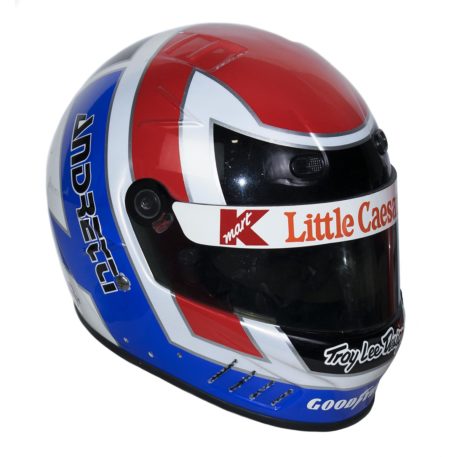 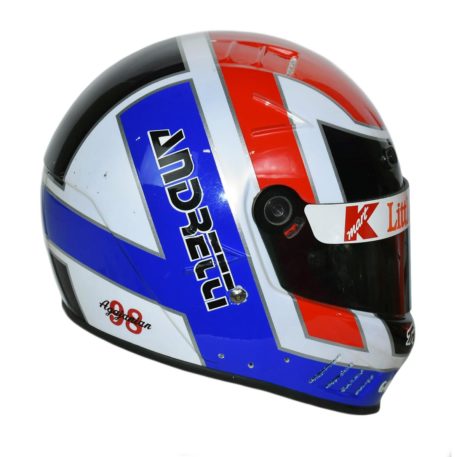 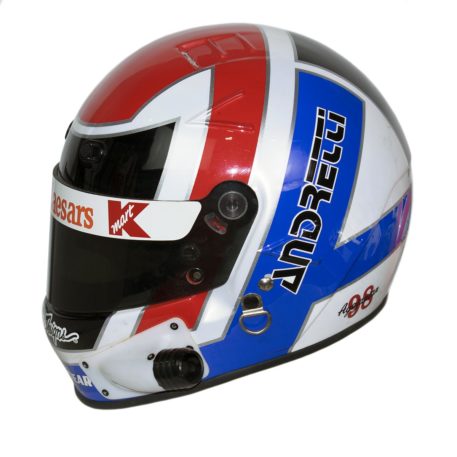 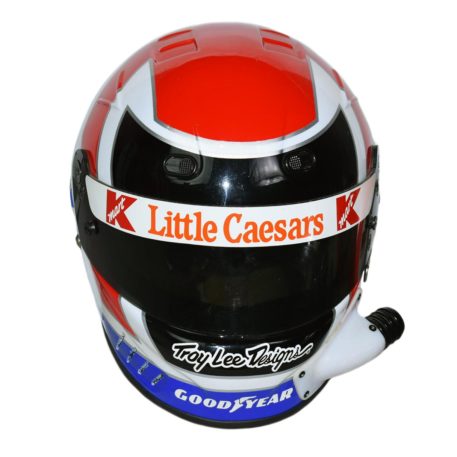 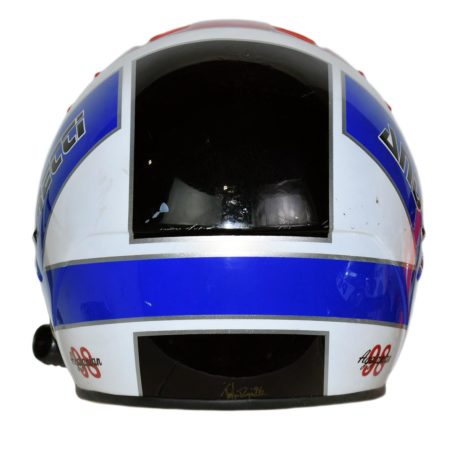 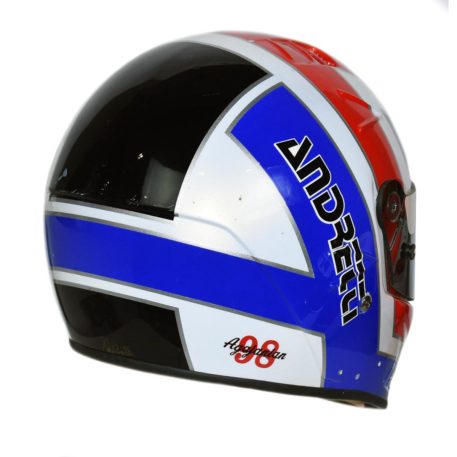 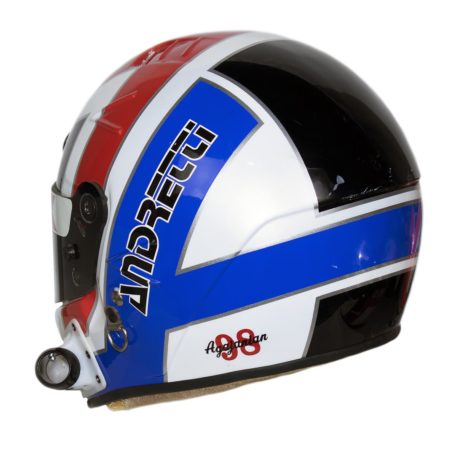 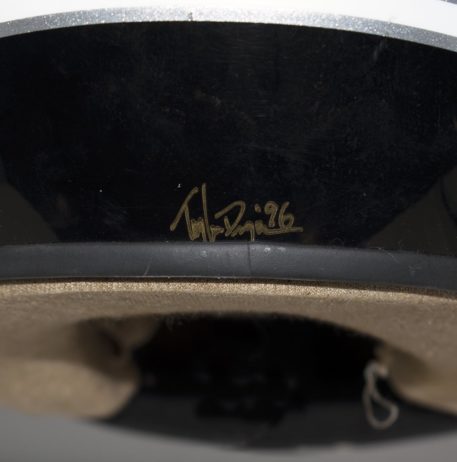 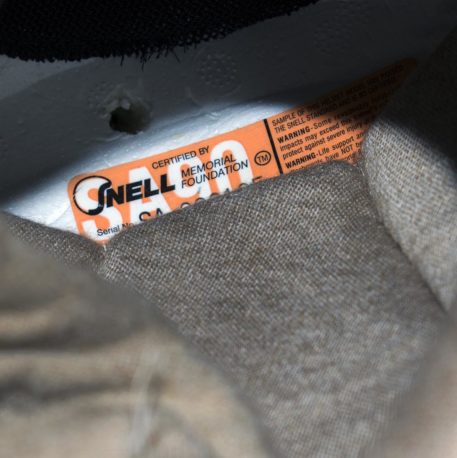 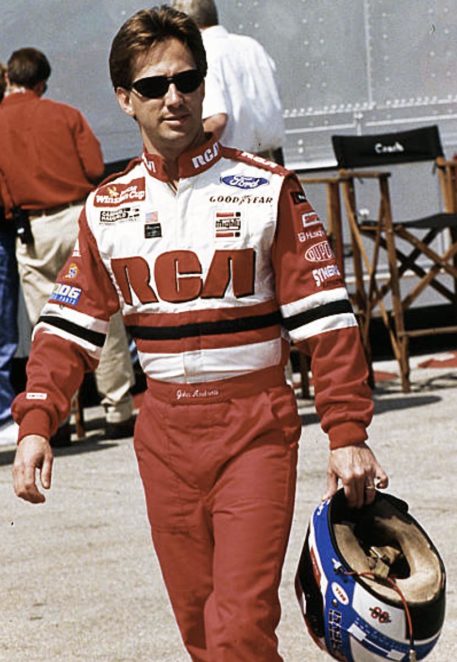 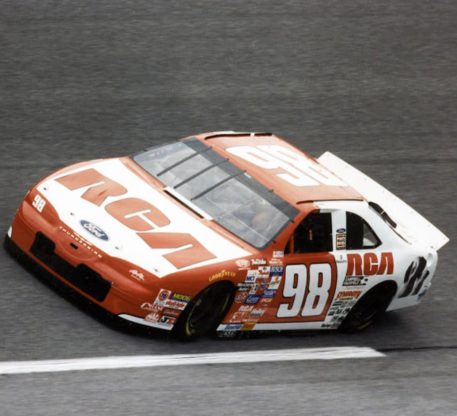 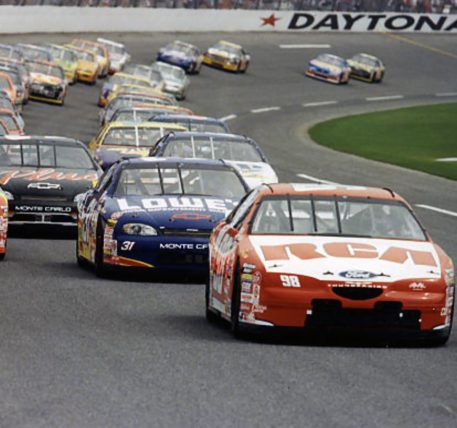 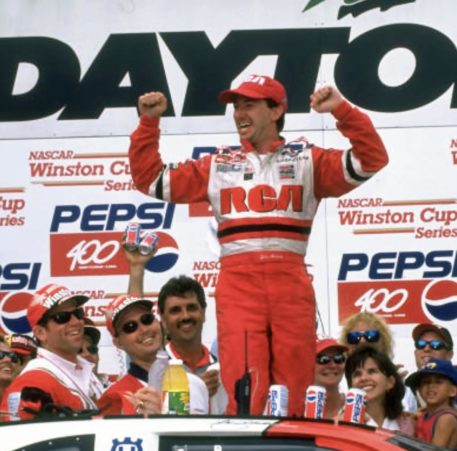 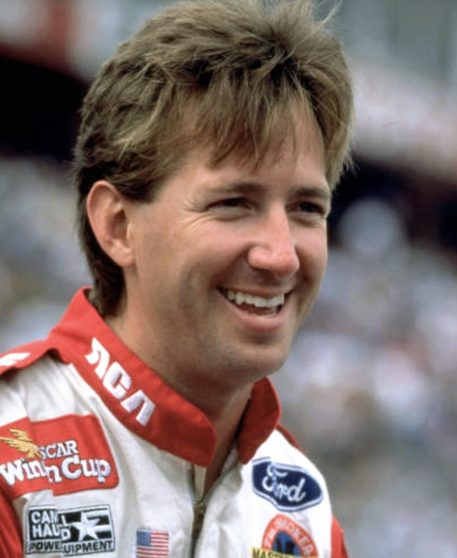 Bell helmet used by John Andretti during his time with the Cale Yarborough Racing, which is indicated by the ‘Agajanian 98’ decal on either side of the helmet. The race #98 has always been associated with the Agajanian family as they have owned and sponsored many race cars with this particular number. The Troy Lee painted helmet has Andretti’s customary design of black, red, and blue bands and panels overlaying a pearl white base color. Andretti’s name is within the blue bands that extend up from the bottom of the helmet on either side. It has the decals of Troy Lee Designs and Goodyear on the chin, as well as the aforementioned Agajanian decals. On the base at the back of the helmet Troy Lee has added his customary signature. It also has drill holes where the race radio was attached to its right side and the airflow tube connector on the left cheek.

After driving in the CART IndyCar series for a number of years John Andretti would venture out into other forms of motor sports and in 1993 he joined the then NASCAR Winston Cup Series and within a couple of years he was regularly running full seasons. In 1996, while he was in his second year driving for the Michael Kranefuss Racing Team, John was invited to switch teams and asked to drive the #98 RCA-sponsored Ford owned by Cale Yarborough in the final 8 races of the season. He would place 5th in the Hanes 500 and also had two more top-ten finishes that year. He stayed with the team for the 1997 season where he would score his one and only career NASCAR victory in the Pepsi 400 at the Daytona International Speedway. Andretti spent many more years in the series, as well as doing some stints in the NASCAR Truck series, in NHRA drag racing, and occasionally returning to IndyCar to run in the prestigious Indianapolis 500. John was the son Aldo Andretti and was nephew to Mario Andretti and he was cousin to former IndyCar drivers Michael and Jeff Andretti. Sadly, after a long battle with cancer, John would pass away in 2020.

Photos indicate the helmet was used during the 1996 season likely for both teams as he switched between a couple of helmets that season. It may also have been used into the 1997 season too. Troy Lee Designs seemed to have updated the sticker placement on this helmet and once the helmet was retired for good, Andretti placed his original Little Caesars / K Mart visor back on the helmet.

This helmet was personally given by John Andretti to renowned Indianapolis artist Ron Burton and, as many collectors will know, John Andretti’s race-used helmets rarely come onto the open market. John kept almost all of his helmets and once even refused to give his Cousin Michael (his then team owner for the Indy 500) a helmet, stating that “unless the helmet was removed from his contact he wouldn’t drive for him”.

Don’t miss out on this great opportunity to own such a rare helmet and add it to your collection.