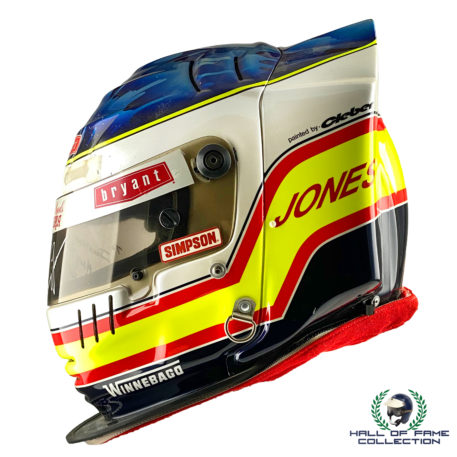 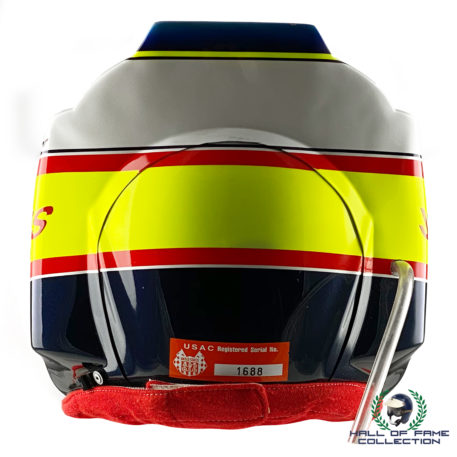 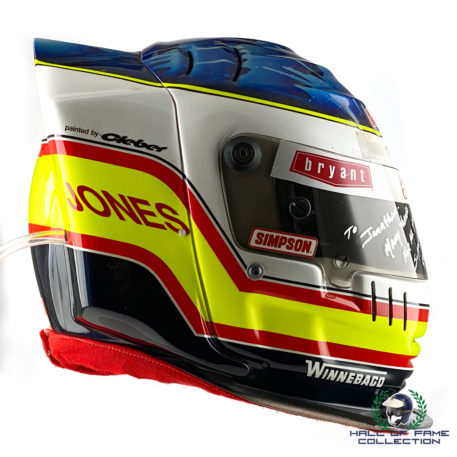 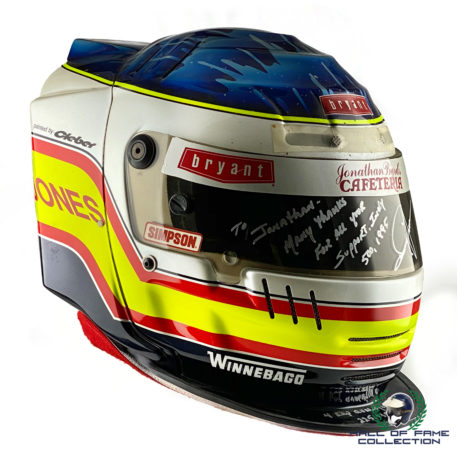 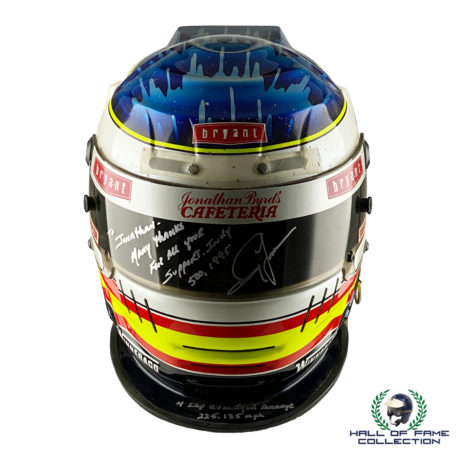 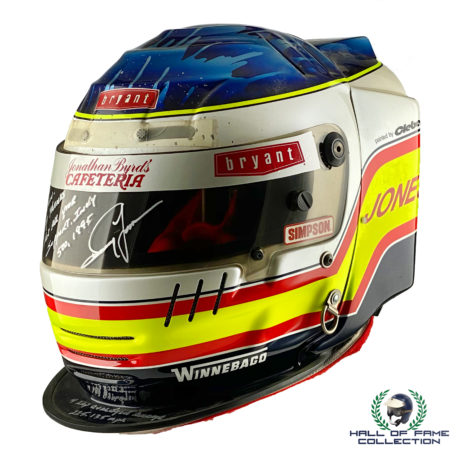 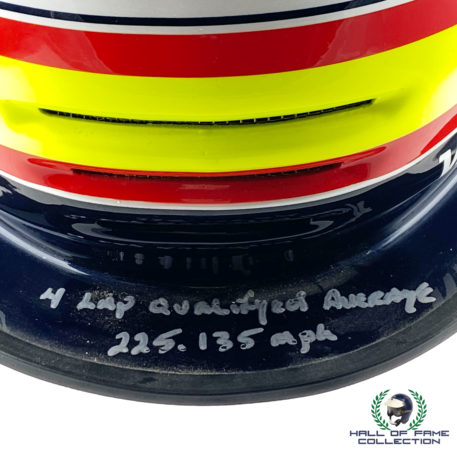 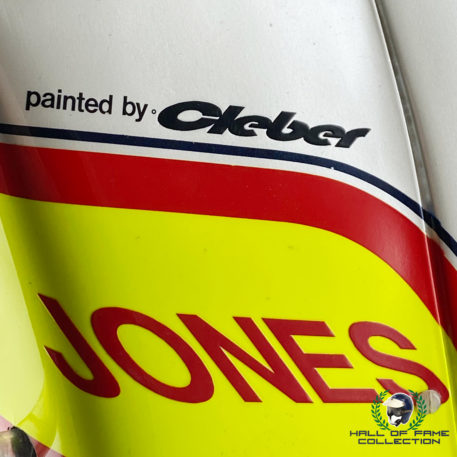 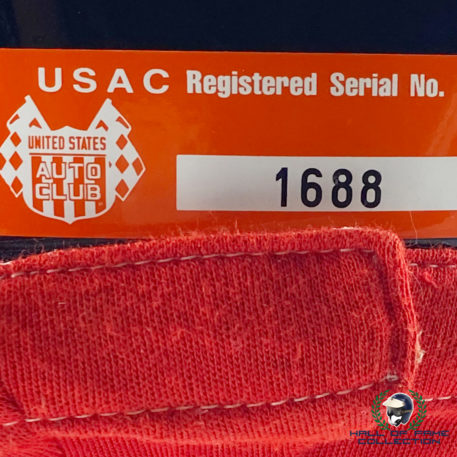 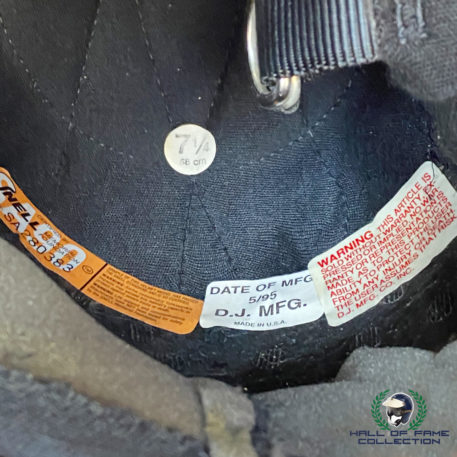 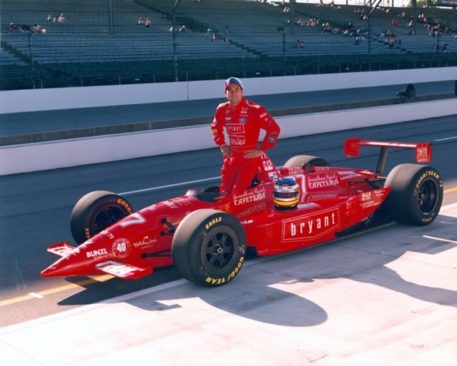 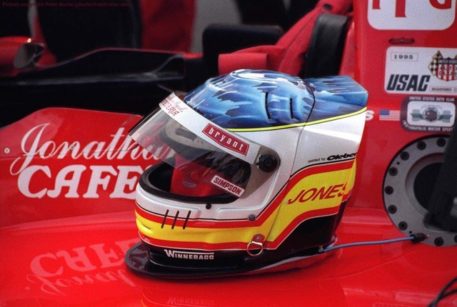 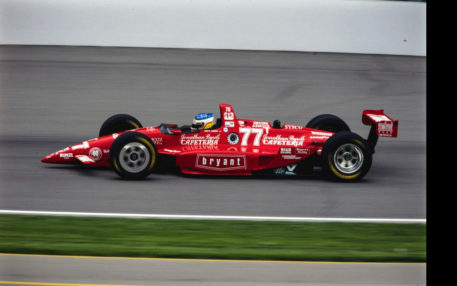 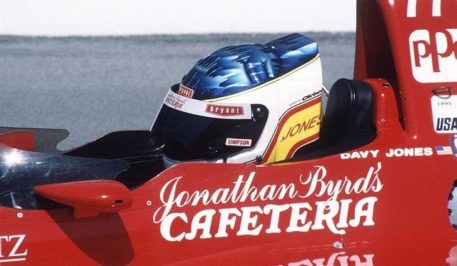 Fantastic rare helmet from the talented Davy Jones who used this helmet in the 1995 Indianapolis 500. This unmistakable and highly collectible Simpson Raptor helmet is unlike any helmet out there with it unique flared aero skirting making it look very much like a velociraptor.

Davy Jones had a fantastic racing career that spanned 206 starts,  72 podiums, 18 poles, 24 fastest laps and 29 wins in all categories. Davy Jones’ UK part of his racing career started with three Formula 3  races in 1982. In 1983 he did a full season and showed Jones’ promise. He achieved third in the championship behind two familiar names; Ayrton Senna and Martin Brundle. He then participated in three different championships in 1984 – European Formula 3, New Zealand’s Formula Pacific and US-based Formula Atlantic. He was the most successful in Formula Pacific, winning four races, including New Zealand GP, to finish third in the points. He repeated a victory at New Zealand Grand Prix in 1987.

Jones then had an opportunity to test a F1 car after Brabham’s owner Bernie Ecclestone invited him to the test event at Brands Hatch. When a ride in F1 failed to materialize, he switched his focus back to his native USA. He raced in the America Super Vee series in which he finished 2nd in the championship. In 1986 he joined BMW North America’s IMSA GTP programme and scored their first win at Watkins Glen.

He continued to raced in many open-wheel competitions and sportscar racing all over the world. Davy  was again successful in IMSA winning Daytona 24h  in 1990 and becoming a vice-champion in 1992 with Jaguar Racing. That said, 1996 proved to be the highlight year of his career with  a victory at 24hr of Le Mans in 1996 with Joest Racing’s TWR Porsche WSC-95 and coming in second in Indy 500 that same year. It should be noted that Jones almost won The Indy 500 until he was passed by Buddy Lazier with only 7 laps to go.