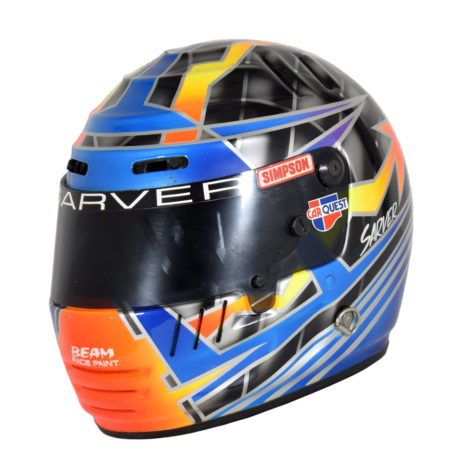 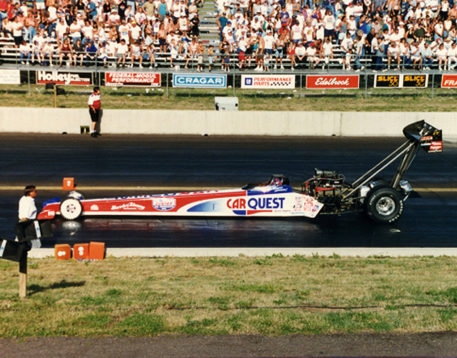 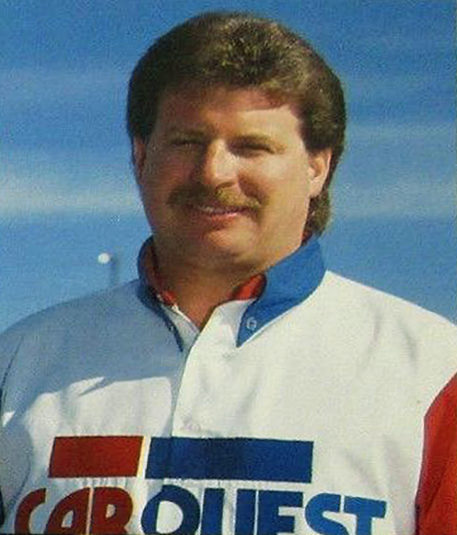 Helmet used by Californian Bruce Sarver in 1996. Sarver began his racing career in 1974, at the age of 12, in karting. Between 1975 and 1994 Bruce claimed a total of 176 major karting event wins. As the owner of a Pro Stock Car Team in 1985, Bruce chalked up five race wins at the Bakersfield Speedway. With a Coca-Cola 100 main event win and three additional victories between 1991 and 1993 under his belt, Bruce would sell his stock car team in 1994 to then enter NHRA drag racing. He began racing Top Fuel in the Car Quest Auto Parts dragster and, in his rookie season, he qualified for 18 out of 19 events. The next season, he made it to his first final in Englishtown. He switched to the Funny Car class in 2000 where he opened the 2001 season with a win in Phoenix. He ended the season with a 6th-place points finish. Sadly Bruce Sarver committed suicide in 2005.

This Simpson Super Shark Helmet was used by Bruce Sarver while driving the Car Quest Auto Parts Top Fuel dragster during the 1996 NHRA season. Airbrushed by Beam Race Paint, it has a black & silver square diamond design on the top, back and sides. There are blue edged, silver graphic flashes on the front that extend around to both sides. There’s also a blue edged silver band with three silver stripes that runs around the bottom that widen at the back. This is all finished off with a orange/yellow chin that has four arrows that extend to the top and sides. Sarver’s name is on both sides and on the visor, along with Car Quest decals.