Please Note: The HOFC website will be offline this Friday, Sept 24th, 2021 at 10:00 pm EST until Saturday, Sept 25th, 2021 10:00 am EST for scheduled maintenance. If you need any assistance please email us at [email protected]on.com We appreciate your patience and support. 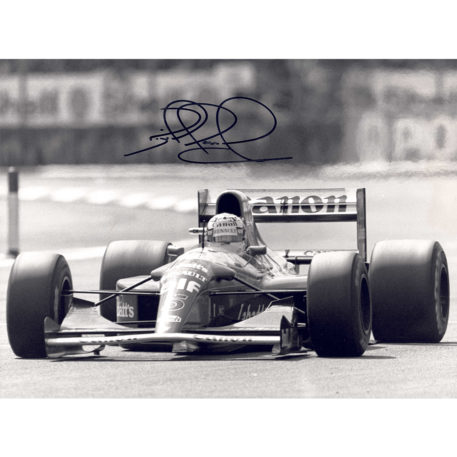 This 9.5  by 7 inch black and white original photograph of Nigel Mansell on his way to winning the 1992 British Grand Prix at Silverstone. Mansell beautifully signed the photo in black marker pen.

What a year that was for Mansell and Williams winning both the Driver’s and Constructor’s Championships. He retired in 4 of the rounds, but when he finished a race he either won (9 times) or placed no lower than second (3 times).

This photo makes a great collectible of that truly dominant Championship season.

This signed photograph comes with a Certificate of Authenticity.