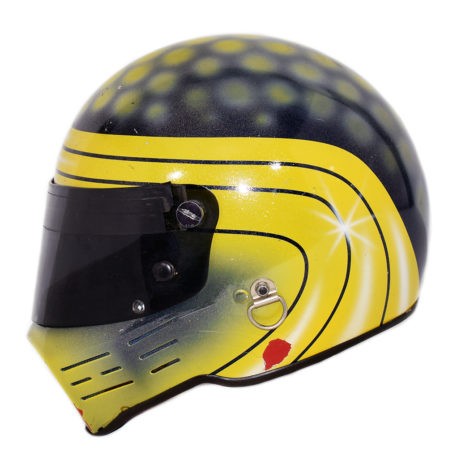 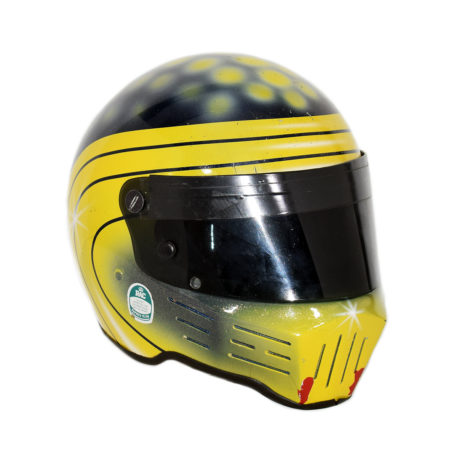 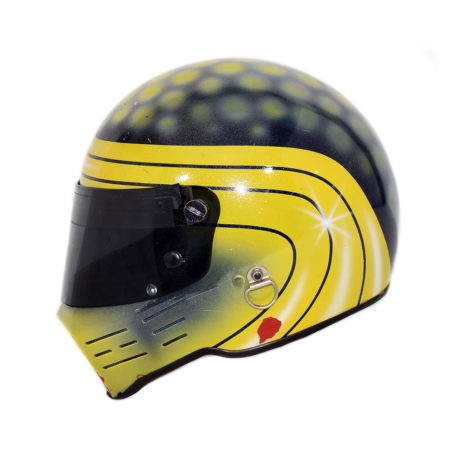 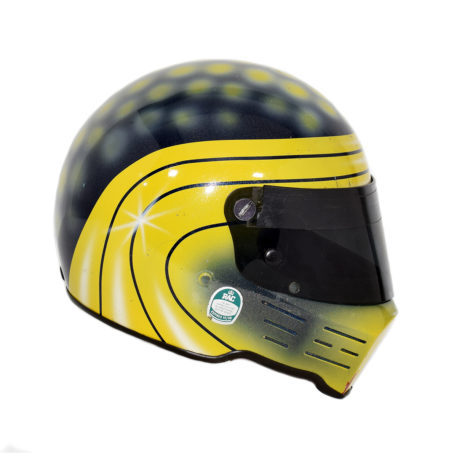 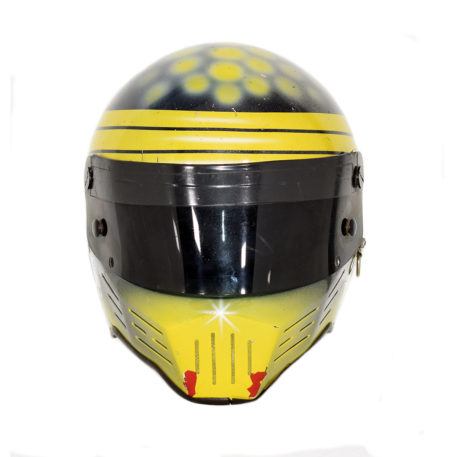 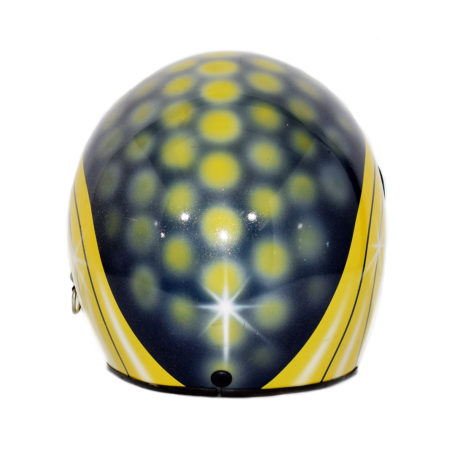 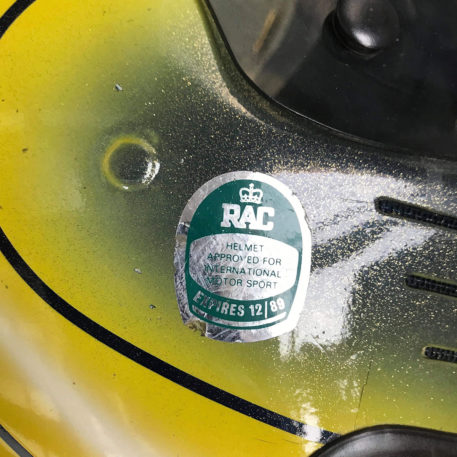 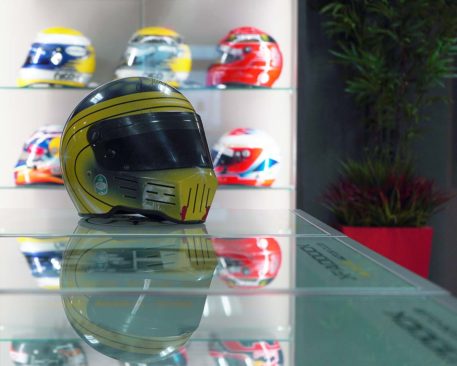 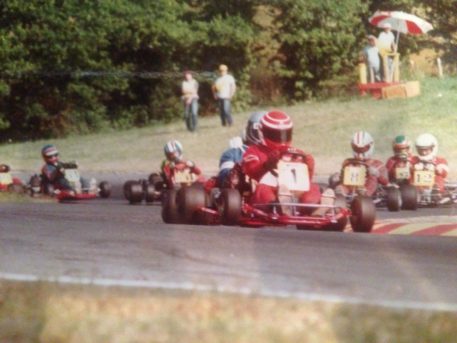 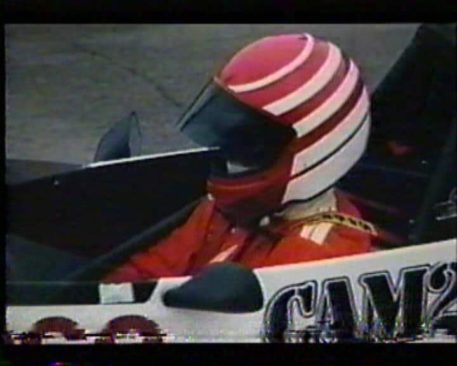 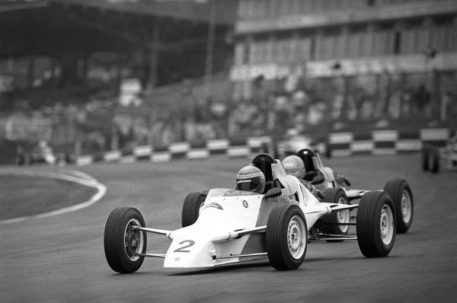 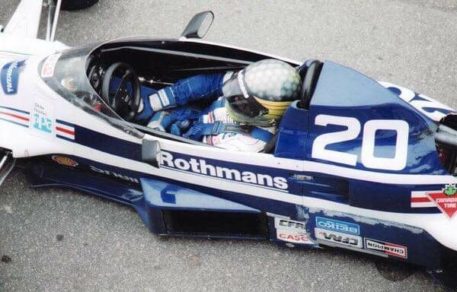 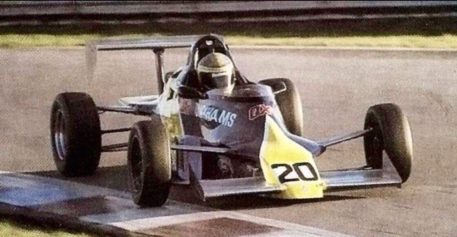 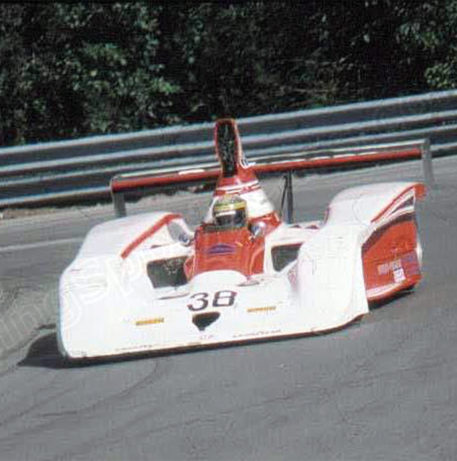 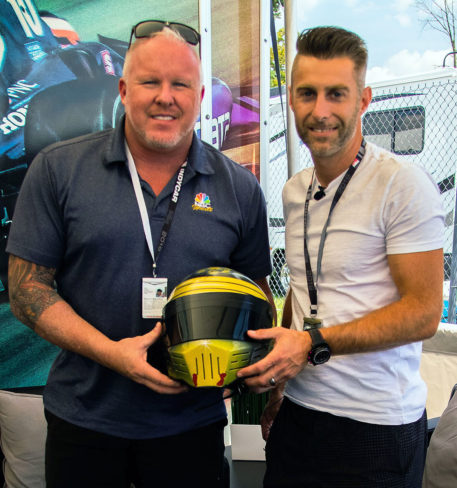 Very rare 1980’s Simpson helmet used by Paul Tracy early in his career. When recently shown the helmet again, Tracy referred to it as “my first real hand painted helmet”, as seen in the above video clip.

This helmet has an amazing history. Even though his preferred helmet colours were bright yellow and green, a rule in the World Karting Championships forced Paul to paint his helmet red & white to match the country colours of Canada.

Paul and his father Tony painted this helmet themselves before the teenager set off to compete in the World Karting Championships in 1984. Tracy finished 6th against many top drivers at that event including a young German karter named Michael Schumacher. The helmet remained red & white for the 1985 season as Paul moved up to Formula Ford.

It was then repainted with Paul’s preferred helmet colours, an iconic design, that would stay with him for most of his career. He could be seen using this helmet in Formula Ford 1600 & 2000 in both Canada and England, for many events in 1986.

On the 14th of September 1986, the famous CanAm Series ran its final race of the season and a 17 year old Tracy was drafted in as Horst Kroll’s team mate. Kroll was hoping to win the race and the championship, but instead he placed 2nd as his teenage recruit took the victory and became the youngest CanAm race winner in history.

After winning the Canadian Formula Ford and American Racing Series Championships it was time for Tracy to make his IndyCar debut. At Long Beach in 1991, he rented an outdated chassis for $105,000 from Dale Coyne Racing, but it was enough to catch the eye of Roger Penske who immediately snapped him up. Tracy would score his first victory only 2 years later by winning the 1993 Long Beach Grand Prix. He went on to score 31 career victories and capture the CART Championship in 2003.

Tracy race worn items are highly collectible and this rare helmet was acquired from the Ron Burton Helmet collection. Burton was friends with many drivers and often traded one of his famous paintings for a driver’s helmet. This helmet had been on display for many years at Union Jack Pub in Speedway (Indianapolis) Indiana.

Don’t miss out on this rare chance to own such a unique helmet for your collection.