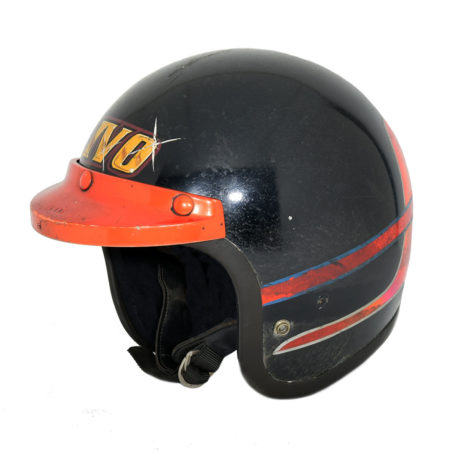 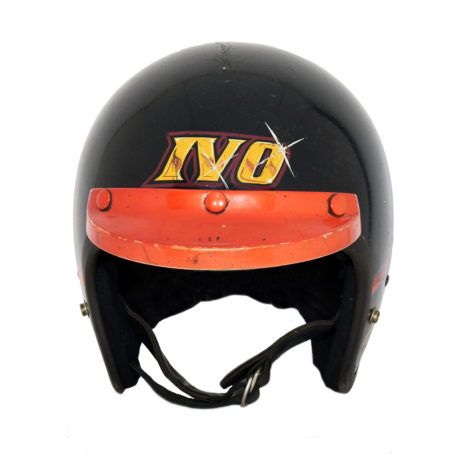 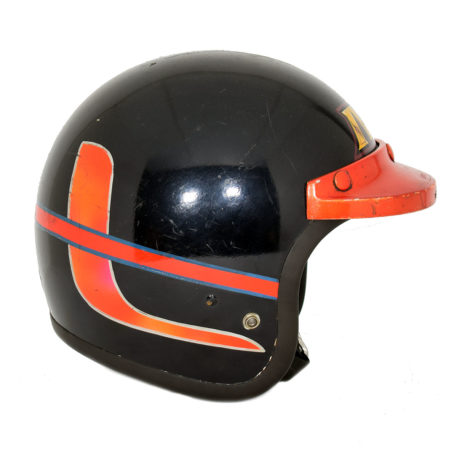 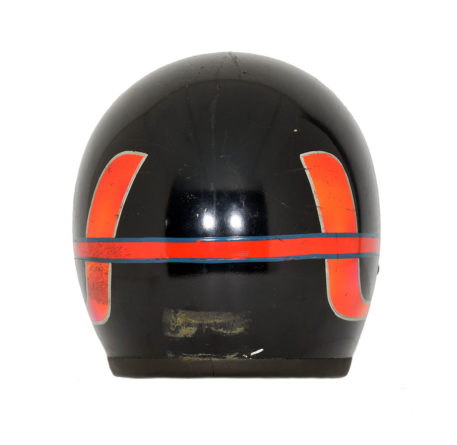 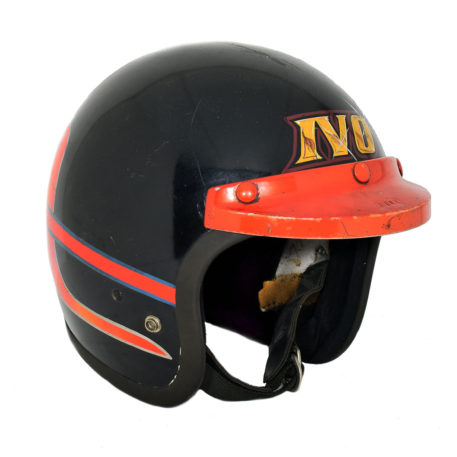 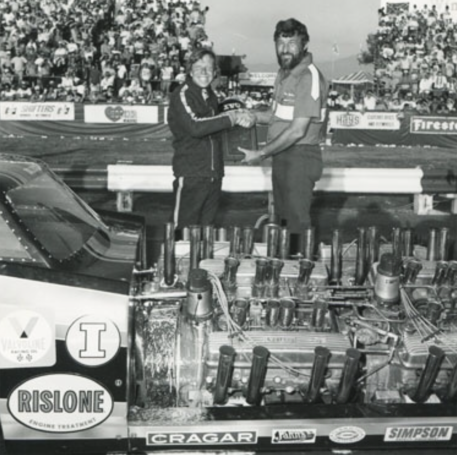 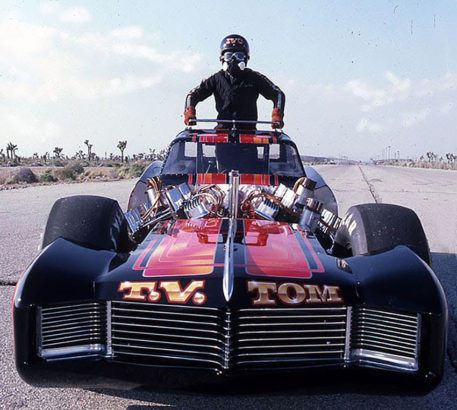 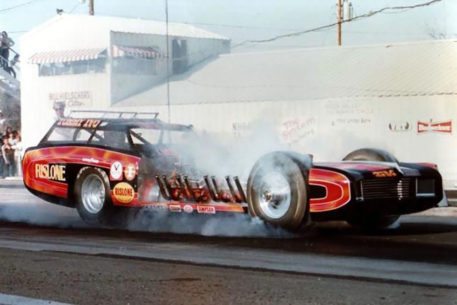 Helmet used by Tommy Ivo in 1982. Ivo is one of the greatest showmen in the history of Drag Racing. He first came to fame as a Hollywood actor. He is also known as “TV Tommy,” and has appeared in many movies and TV shows. In his spare time, between filming gigs, the mechanically minded teenager built and raced cars. In the late 1950s, Ivo raced a twin (side by side) Buick-engined dragster which was the first gasoline-powered dragster to break the nine-second barrier. The car held the Drag News AA/GD record at 8.69 seconds. The Twin Buick also was the first gas dragster to record speeds of 170, 175 and 180 mph which were Standard 1320 records as well. It was unique in appearance and won numerous races, including NASCAR’s first National Drag Race. Later he designed a four-engine, four-wheel-drive dragster he called ‘Showboat’ (with a quartet of Buick engines, two on either side of the car), but he was unable to race it due to an NHRA ban. Instead Ivo took it to meets as an exhibition car employing other drivers to drive it while he went racing. In 1963, Ivo’s ‘Barnstormer’ (a nitro-burning 392 Hemi-powered slingshot dragster), became one of only two seven-second Top Fuel cars. Ever the showman, Ivo set up a Seven Second Match Race with the other seven-second drag race car, the Greer Black Prudhomme car. During 1964 Ivo travelled to England with Don Garlits, and other racers, to participate in the First International Drag Festival, which did much to promote drag racing in the United Kingdom. During 1972 and 1973, Ivo attended 100 race meets; this record was matched only by “Jungle Jim” Liberman and Ed “The Ace” McCulloch. Ivo drove in both the Top Fuel and Funny Car divisions and came up with even more radical ideas for his cars. He was inducted into the Motorsports Hall of Fame of America in 2005.

His ‘Showboat’ car was later sold but it still appeared at many events until its new owner, Tom McCourry, decided to update the car and have a Buick station wagon body put on its frame. He also renamed it ‘Wagon Master’. Ivo decided to quit full-time drag racing in 1982 and set up a countrywide farewell tour driving the Wagon Master. Unfortunately, only after a couple of events, Ivo broke three vertebrae in his back after hitting a bump on a track. However, he recovered enough later on during the year to do one last pass in the car. He did parade the car once more at the 1996 Indianapolis Hot Rod Nationals.

This open-face helmet was used in those final runs of the car back in 1982 (photo-matched, please see pictures). The all-black hand-painted helmet has white edged ‘boomerang’ shaped designs on either side that have a paint fade full of red, pink and orange. A thin florescent red band, edged in blue, runs around its middle. On the top front, there is gleaming gold ‘IVO’ lettering that is edged in black and maroon. The helmet is completed with a hand-painted red peak.