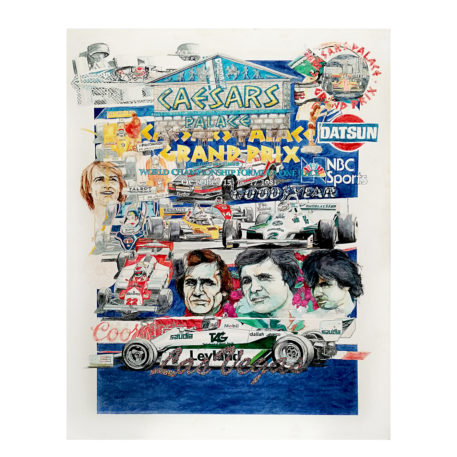 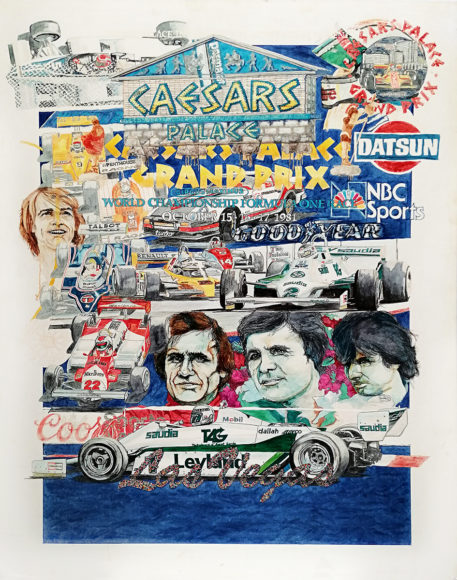 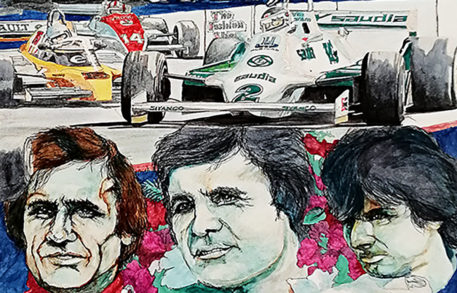 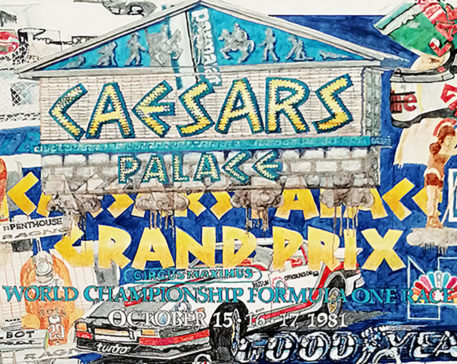 Fantastic original artwork by famed Indianapolis native and motor sport artist Ron Burton. This piece was commissioned by the organizers of the 1981 Caesars Palace Grand Prix. It was to be their main promotional poster for the event that was to be run on a track created on the parking lot of the iconic Las Vegas, Caesars Palace hotel. The race was the final round of the 1981 season, run over the weekend of the 15-17th of October. Also a championship decider between the three main contenders Carlos Reutemann, Nelson Piquet, and Jacques Laffite. The eventual race winner was the then reigning world champion, Alan Jones. Nelson Piquet, who finished fifth in the race but in front of his rivals, claimed the 1981 World Championship title as a result. The faces of all of these drivers feature in the artwork.

The medium is black ink and colored marker pen on artist board. At the top of the work is one of Caesars Palace Hotel’s building apexes, with Roman figures and ‘Caesars Palace’ logo. Below there’s also a Datsun logo and Pace Car (Datsun was the race’s main sponsor), and also just below, a NBCSports T.V. logo (NBC covered the race live).

Prominently, and to the forefront at the bottom of the work, is Alan Jones 1980 Championship winning Williams overlaid with the words ‘Las Vegas’. Other than the drivers’ images already mentioned above, the piece also contains images of many of the cars that competed in the race. Some of the cars included are Mario Andretti’s Alfa Romeo, Alain Prost’s Renault and Nelson Piquet’s Brabham to mention but a few.

This stunning piece measures approximately 30 x 24 inches (80 x 50 cm). This is a great chance to own a piece of Ron Burton’s original artwork.