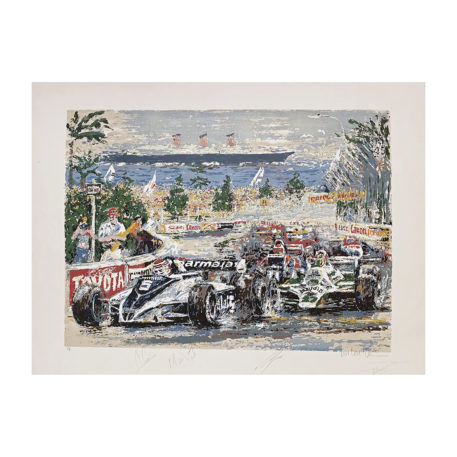 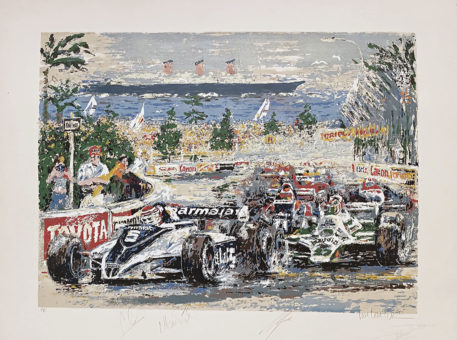 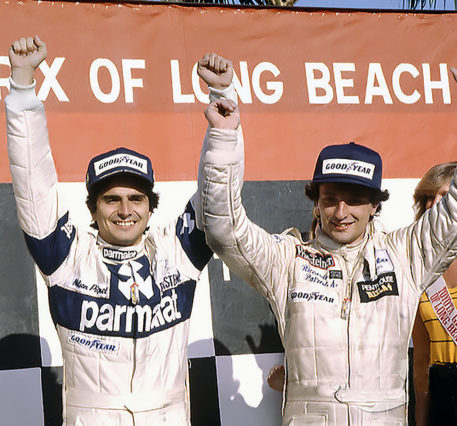 This fantastic Artist Proof serigraph print was reproduced from the original artwork of renowned Indianapolis motorsports artist Ron Burton. It depicts a scene from the 1980 United States Grand Prix West, officially named the Toyota Grand Prix of Long Beach. The image depicts eventual race winner Nelson Piquet in his Brabham leading a chase group of cars that includes Alan Jones #27, Mario Andretti #11, and Clay Regazzoni #14 around the temporary street course on the shores of Long Beach, California. In the background of the image is the retired British ocean liner RMS Queen Mary that has been moored in Long Beach since 1967. Piquet would score a ‘Grand Chelem’ by taking pole, scoring the fastest lap, and leading all 80 laps on his way to his first career race win. The Brazilian’s qualifying time was a full second ahead of the rest of the field, and he would lead all 80 laps of the two-mile circuit, taking the race win by 49 seconds in his blue and white Brabham-Ford BT49.

This rare print is one of 300 limited edition prints that Ron Burton had silk silkscreen printed on thick heavyweight art paper. All 300 were signed by Ron and only a total of five were Artist Proofs. This particular print is an extra special one-of-a-kind, as Ron had race winner Nelson Piquet, second place Riccardo Patrese, 1980 World Drivers Champion Alan Jones and American racing legend and 1978 World Champion Mario Andretti personally sign the print to keep in his own collection. Hall of Fame Collection was able to acquire this print, with many other of Ron’s artwork pieces, when he decided to retire. The print dimensions are approximately 42 x 36 inches (102 x 97cm).

This is a great opportunity to own this stunning unique print signed by no less than three World Champions.

The print comes with a full Certificate Of Authenticity.