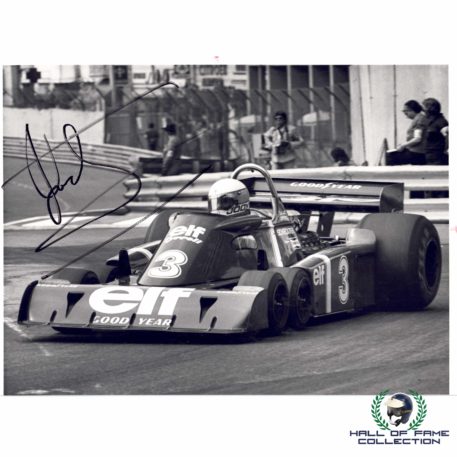 This is an 8 x 6 inch photograph of Jody Scheckter in 1976 while driving the wild 6-wheeled Tyrrell. Scheckter holds the honor of being the only driver to ever win a race in a 6-wheeled car when he won the Swedish Grand Prix that year. Three years later Scheckter would be crowned F1 World Drivers’ Champion while driving for Scuderia Ferrari. He also holds the distinction of being the last driver to win an F1 Championship for Ferrari until a certain Michael Schumacher came along and did just that 21 years later.

Jody Scheckter has signed the photo in black marker pen and it comes with a Certificate Of Authenticity.