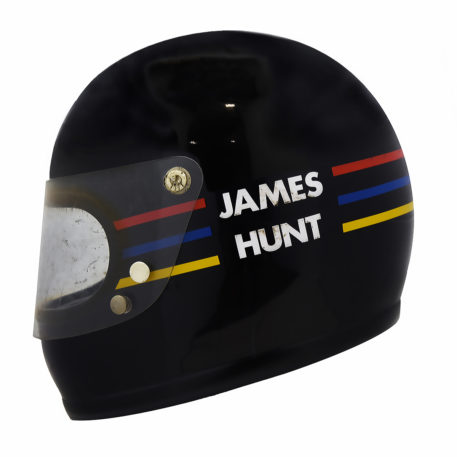 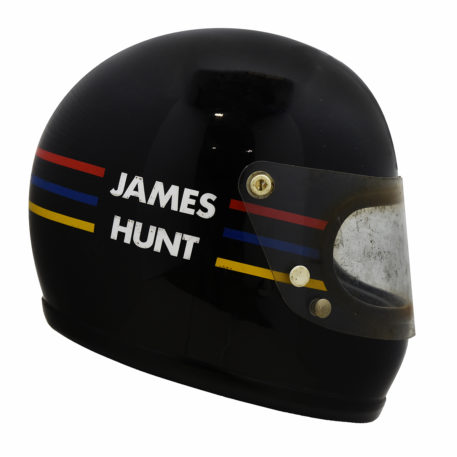 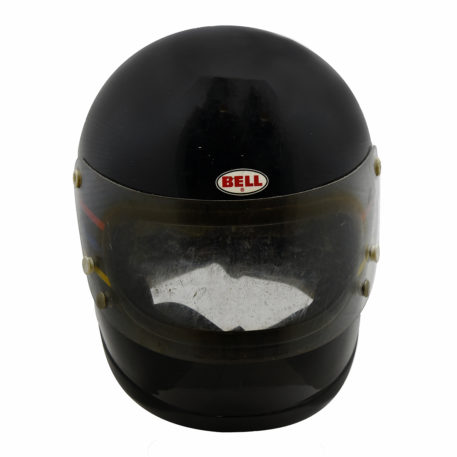 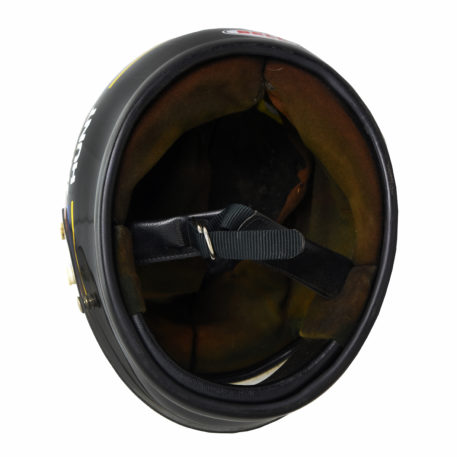 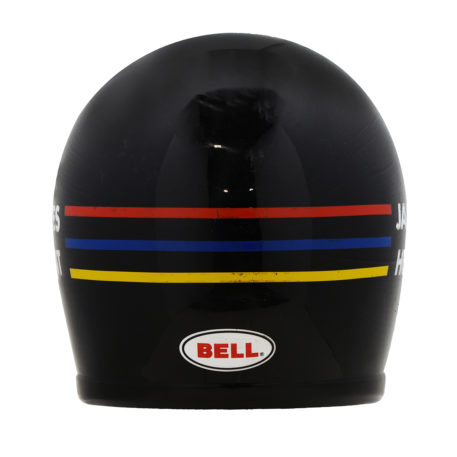 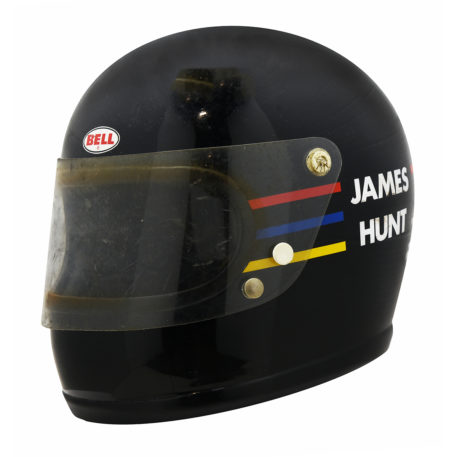 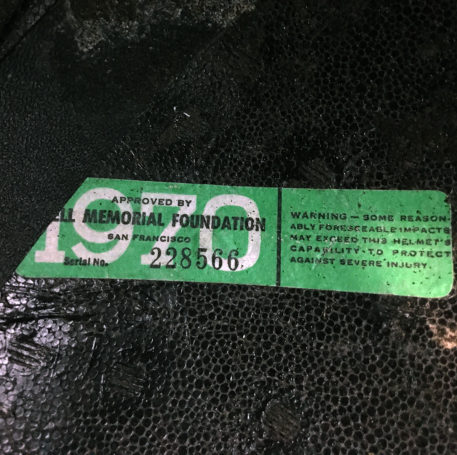 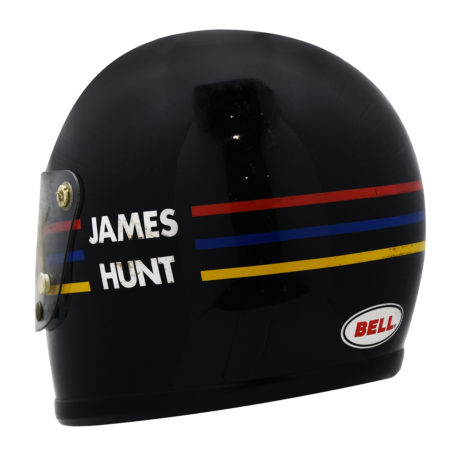 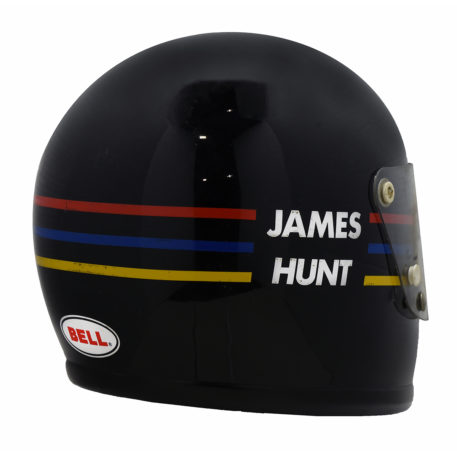 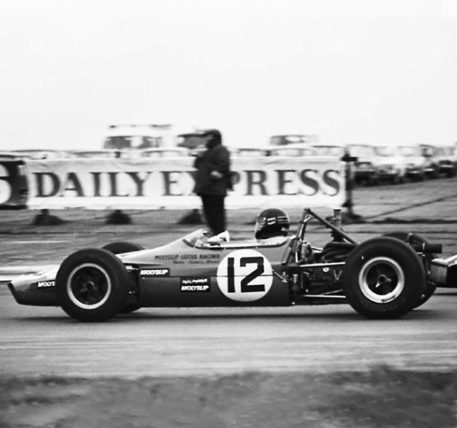 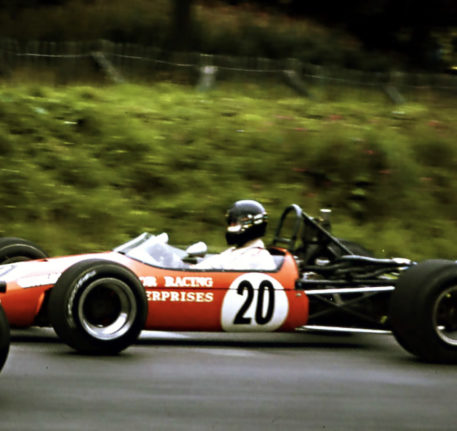 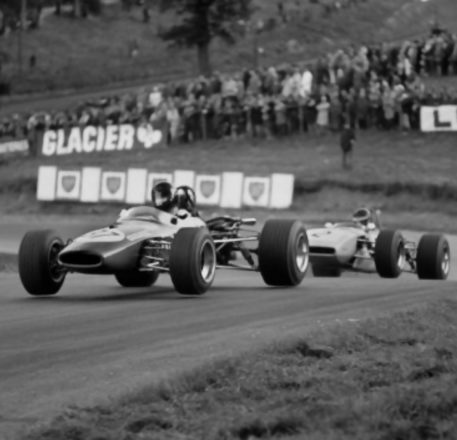 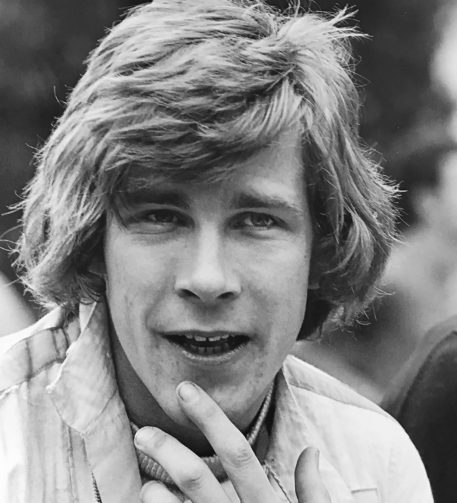 Bell Star helmet used by the one and only James Hunt in the early days of his racing career. The popular British driver, who won the 1976 Formula One World Drivers’ Championship title, began his racing career in Mini Cooper cars, and would then race in his own car in Formula Ford events during the late 1960s. He would quickly graduate to Formula 3 racing, and with his aggressive ‘never give an inch’ driving style and his volatile personality was involved in several accidents earning him the now-famous nickname “Hunt the Shunt”.  Naturally, this would also see him getting in trouble with racing’s governing body on more than one occasion. But Hunt proved his worth and with his talent being noticed he was contracted to drive for the works STP-March Formula 3 team. In 1972 his ‘bad boy’, non-conformist reputation caught up to him and the team dropped him as their main driver. Nevertheless, still under contract, he got to drive a spare car at some events, but true to form Hunt went against his team orders by driving a privately owned March in an F3 race at Monaco.

This helmet was used during the 1970/71 F3 seasons and is likely one of the oldest original Hunt helmets still in existence today. It bears the smaller sized name lettering on either side that he used on his earlier helmets. It was around 1971/72 that Hunt decided to use larger sized lettering on all of his helmets. The helmet shows all the signs of racewear and age and has a Snell dated 1970. Its black base color has the distinctive individual red, blue and yellow-colored bands running around the middle of the helmet, representing Wellington College School that Hunt had attended. These are broken up on either side by Hunt’s name with the aforementioned white lettering. The helmet was originally acquired from Jeremy Nightingale’s collection by another racing driver.  Nightingale was a former team owner/driver and friend of James Hunt who drove Nightingale’s owned Hillman Imp on occasions.

We are very proud to offer this great opportunity to acquire this unique piece of motor racing history used by an F1 World Champion whose name and well-documented life will live perpetually in the annals of motorsport history.