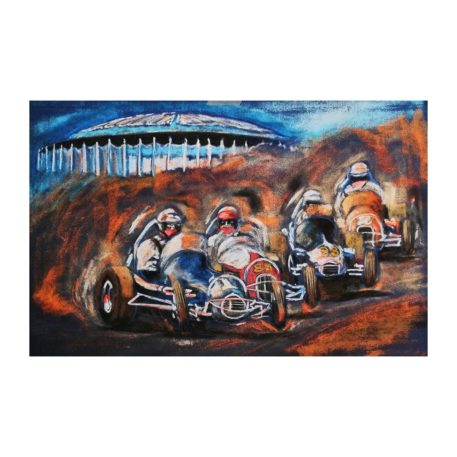 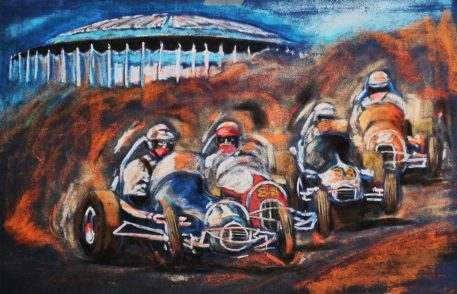 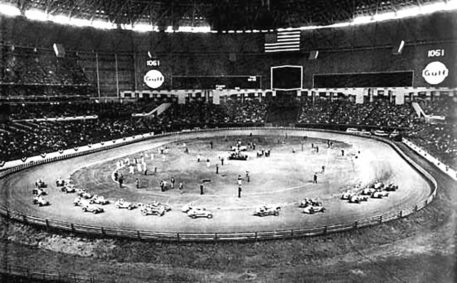 In 1969, ’70 and ’72 the Houston Astrodome was home to the “Astro Grand Prix” Indoor Midget Race. Its onset was a big deal, and the best open-wheel drivers from across the country showed up to compete. It was a full quarter-mile dirt oval, two-day, two-race event. The ‘Dome’ could hold about 50,000 people and, at first, it was a pretty big success with lots of media and print coverage as well as good crowds. But its popularity would slowly fade away. The ‘Dome’ owners said due to damage done by the dirt & dust to the huge air conditioning system, and dwindling attendance at the third event, that it was no longer making money. The three points champions of “Astro Grand Prix” races were Tom Bigelow in 1969, A.J. Foyt in 1970, and Gary Bettenhausen in 1972 (the race was not held in 1971).

This original Ron Burton artwork image shows action from the very first indoor race run at the Houston Astrodome back in 1969. The depiction of the Saturday night race has Gary Bettenhausen holding off the chasing pack to eventually take the victory in its foreground. In the background is a view of the Houston Astrodome.

The medium used by Ron for this work is his unique chalk crayon on black velvet art paper. Its approximate size is 20 x 13 inches.