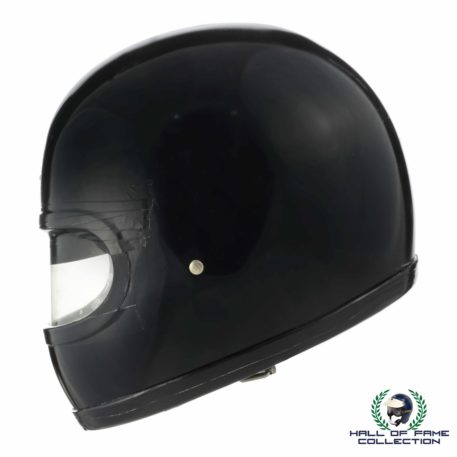 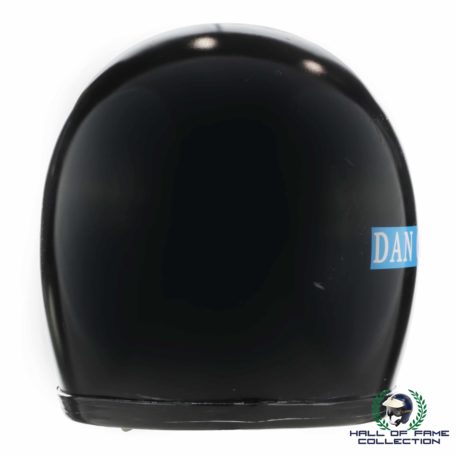 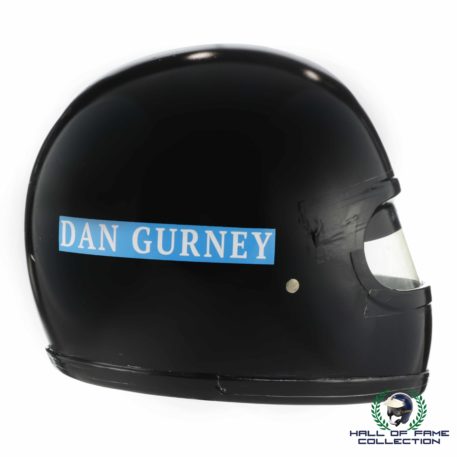 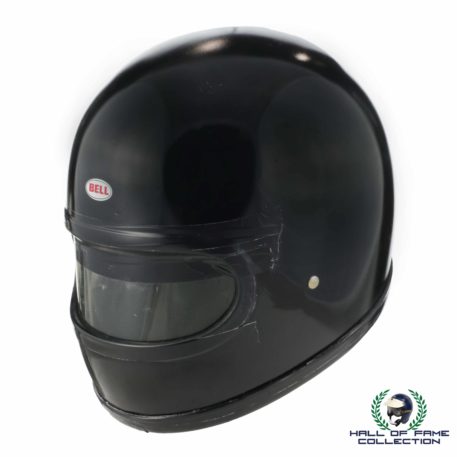 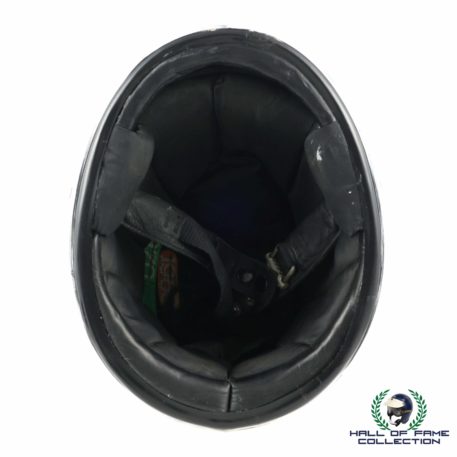 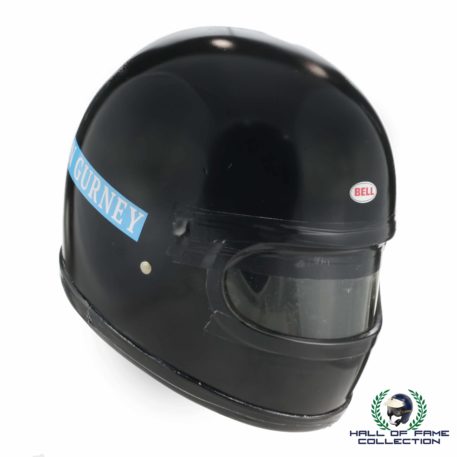 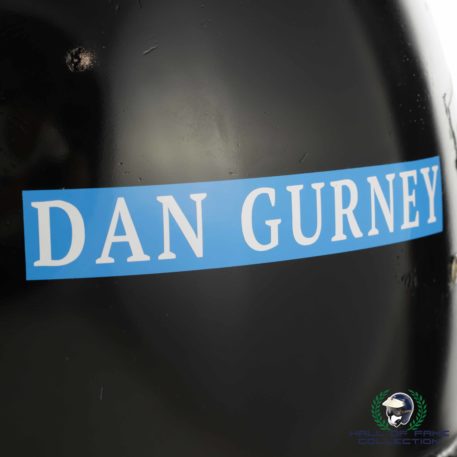 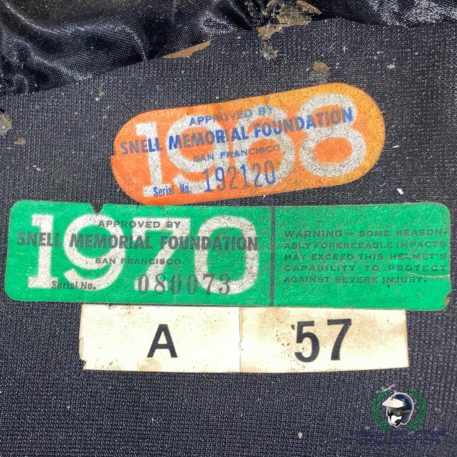 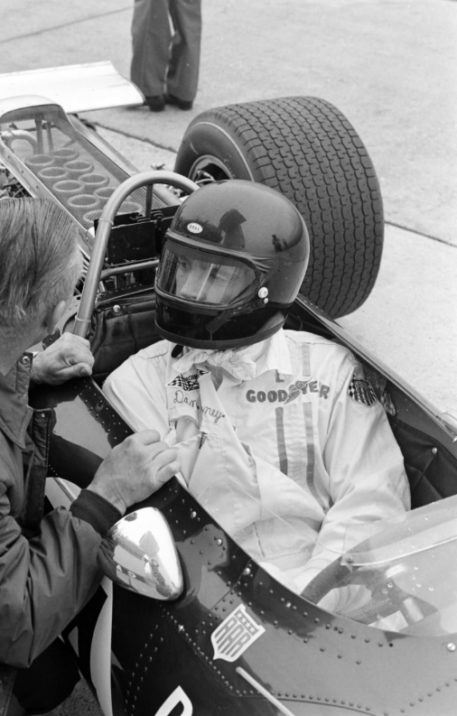 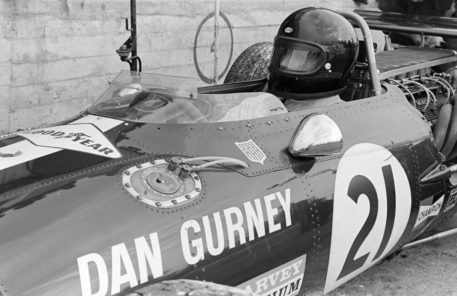 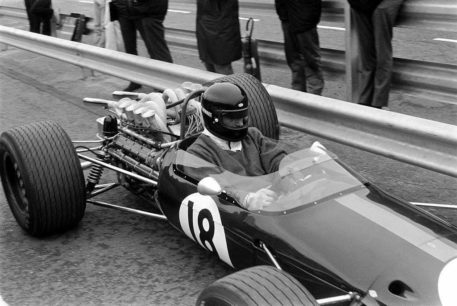 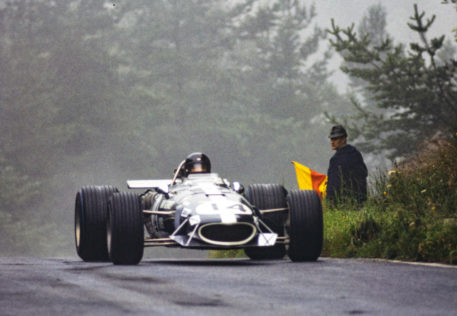 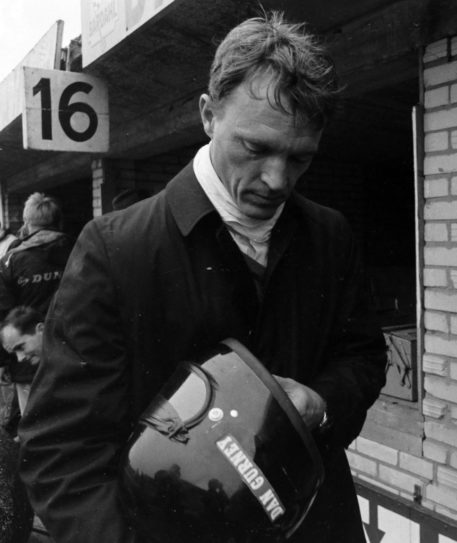 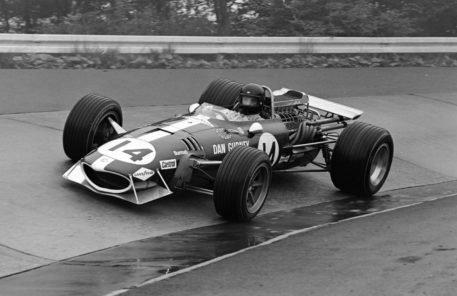 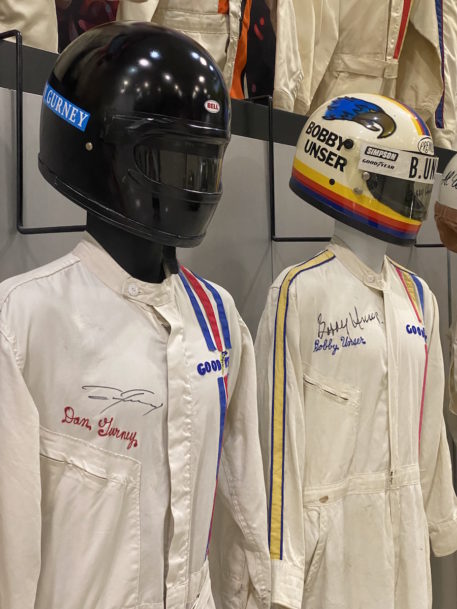 Dan Gurney was not only one of the greatest drivers of his era (winning at Le Mans, as well as in Formula 1 in a car he designed himself and finishing 2nd place at the Indianapolis 500 twice), but he was also known as a pioneer in safety and innovation. Besides his many racing achievements, Gurney was also the first driver to start the tradition of spraying champagne on the podium, and was the first driver to wear a full-face helmet at the top levels of racing while in IndyCar and F1.

The older, romantic images of drivers with blackened faces, highlighted by two circles of clean, goggle-protected skin around their eyes, hides the fact that it wasn’t only exhaust fumes from the cars in front that flew up at them. Dan Gurney, who was to play a key role in promoting a better helmet design, still clearly recalls one frightening incident:

“I was in Frank Arciero’s 4.9-litre Ferrari and I was trying to overtake a car ahead of me which fired a stone from under a rear tire. It went right through the windscreen. It was more akin to a bullet than a pebble. I thought, ‘That would’ve really smarted!” Gurney had already contrived a leather face mask to give improved protection, but it wasn’t until he went to watch some dirt-track motorcycle racing at Ascot Speedway in Los Angeles that he found a complete solution already in use. In dirt-track racing the problem of flying stones was even worse — “like a fire-hose full of them” — and the bikers had an altogether superior defence against it: the full-face helmet, introduced by Bell Helmets, which extended the protection to under the eyes, over the nose and mouth and down below the chin.

Instead of the rider having to wear the traditional goggles, a fixed visor provided eye protection. Gurney realised that here was a ready-made solution to a similar problem faced by race car drivers of his day. Although he wouldn’t be the first to wear a full-face helmet in a racing car — his protege Swede Savage, an ex-biker, beat him to it in 1967 — it was Gurney who brought the design to everyone’s notice when he wore it for the first time at the Indy 500 in 1968 and again, in F1, at the Nurburgring that same year.

He was an instant convert. “I wasn’t the shortest guy in racing, so I normally caught my share of things in the face. The full-face helmet was just so much better — like you were driving a coupe instead of an open roadster. I didn’t know if it would work in the rain but, with anti-fog treatment on the visor, it turned out to be better in the wet, too. It was such a big leap forward it was sensational.” Other drivers took a little more convincing, although within a couple of seasons most saw the light. Why the delay? “Human nature and the reluctance to change was part of it. Then there was concern about whether it would fog up under these often difficult conditions in the rain, but it turned out it didn’t. And some people are claustrophobic — I think there was also some concern about that”

Welcome as it was for drivers not to have their faces peppered with flying stones, the full-face helmet deserves to be regarded as a much more significant development that made the difference between escaping unscathed and sustaining permanent injuries.

This original Bell Star helmet has the correct 1968 Snell sticker and original interior. The helmet has been professionally modified with the internal visor which is one piece and was the original design before the hinged visor came onto the scene shortly thereafter. This helmet model is extremely rare and this near perfect replica of Gurney’s iconic helmet will be a centerpiece in anyone’s collection.