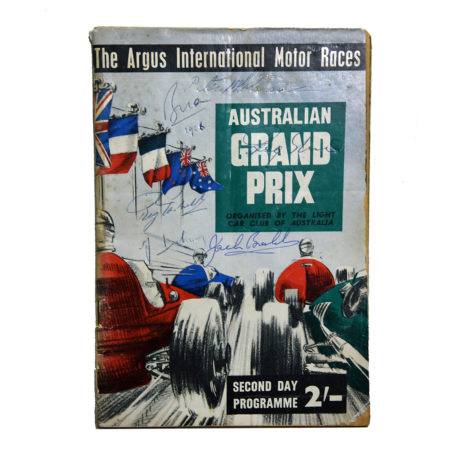 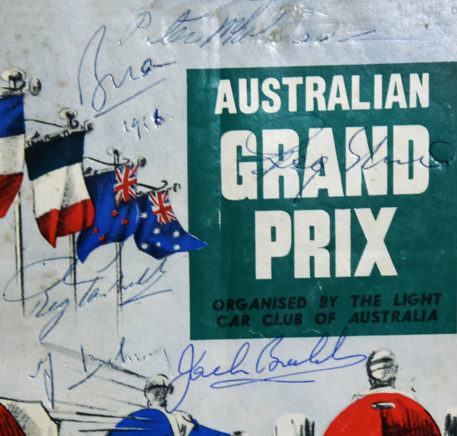 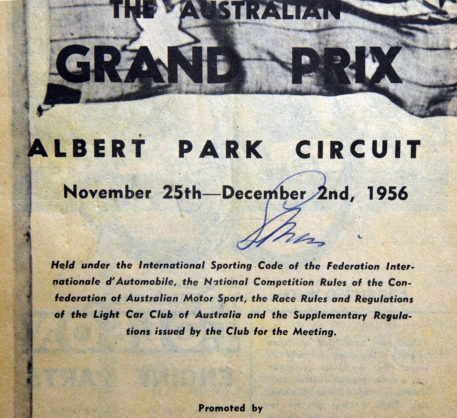 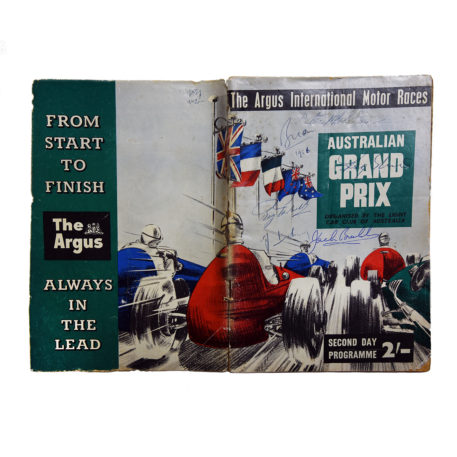 This great vintage program is from the 1956 Australian Grand Prix. It was a motor race for Formula Libre cars held around the Albert Park Lake street circuit, in Victoria, Australia on 2 December 1956. The race, which had 22 starters, was run over 80 laps of the five kilometer circuit, the longest of all the Australian Grand Prix’s at 402 kilometers. The event was held to capitalize on the publicity generated around the 1956 Olympic Games which were being held at the time in Melbourne and, as a result, the race attracted a crowd of well over 120,000 spectators. With the presence of the works Officine Alfieri Maserati racing team, along with their two top drivers of Stirling Moss and Jean Behra, they would also bring a fleet of 250F machines along with them. With fellow European-based racers Ken Wharton, Peter Whitehead, and Reg Parnell, the race became the most important motor racing event held in Australia’s history to that point. Moss and Behra dominated the two-week festival which began the previous weekend with the Australian Tourist Trophy sports car race in which the duo placed first and second. In the Grand Prix, the two were again dominant, but Moss was a class above Behra and finished almost a lap in front of his teammate to take the win.

Video footage of the race can be seen above.

The program contains rare and significant signatures of the day, including the autographs of the top three finishers Stirling Moss, Jean Behra, and Peter Whitehead as well as other competitors such as Reg Hunt, Reg Parnell, Prince Bira and Jack Brabham. The program is in excellent condition for a publication of its vintage but does show some aging as the newsprint pages have yellowed slightly.

A great item to add to your collection