@csncollisioncentres recently made a visit to our

Hamilton on Pole again. Snap these signed gloves u 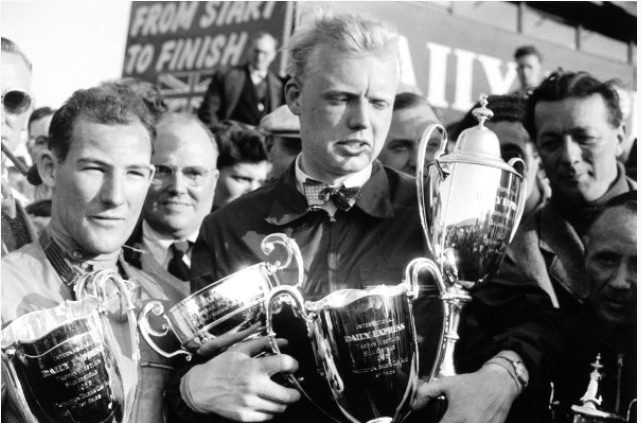 Collecting race-worn items from Formula One World Champions has become a real trend over the past few years. Hall of Fame Collection has been proud to offer so many fantastic original used items from many of the champions past and present.

Recent additions offered include a helmet of 1958 champion Mike Hawthorn, who became the third driver to win a World Championship in a Ferrari. This helmet is particularly rare because drivers in that era of the sport didn’t use many different helmets in their career, sometimes only one in a season. Also, as time goes, things get lost. Remember, it’s been nearly 70 years since this helmet was used.

Hawthorn became Britain’s first World Champion and the lightweight Herbert Johnson helmet now offered by Hall of Fame Collection was used by him during several races in the early ’50s. It has a black lacquer outer with a cork, black leather and black webbing lined shell, black leather chin straps and peak and is fitted with his original Herbert Johnson visor. The helmet was formerly the property of Mike’s great chum, RRC ‘Rob’ Walker, who was given it by Mike’s mother, Winifred, after the funeral in 1959. Rob duly gave it to Tom Wheatcroft in 1968 and he gifted it to his son, Kevin, on his 21st birthday. It was proudly on display at the Donington Grand Prix Collection from 1973 until 2005 and the helmet is accompanied by a Letter of Provenance from the Wheatcrofts Tom & Kevin. This letter is a fascinating read in itself.

The helmet can be seen being used by Hawthorn with this visor as early as 1952, and it’s also likely he kept using it for many more seasons. Very few of his helmets are known to exist.

Also recently added to our collection is an original race-worn suit of 1976 World Champion James Hunt. The Lowenbrau is another one-of-a-kind item.

Hall of Fame Collection also has items from champions such as Mario Andretti, Michael Schumacher, Lewis Hamilton, Kimi Raikkonen, Sebastian Vettel, Jenson Button and Fernando Alonso.It is also important to be on the early end of future champions, which makes collecting items from the likes of Max Verstappen and others is a good idea. Race-worn gloves and helmets are among the items available from these stars.

See all of the one-of-a-kind items from the legendary F1 drivers here.

Hall of Fame Collection items come with a Certificate of Authenticity.