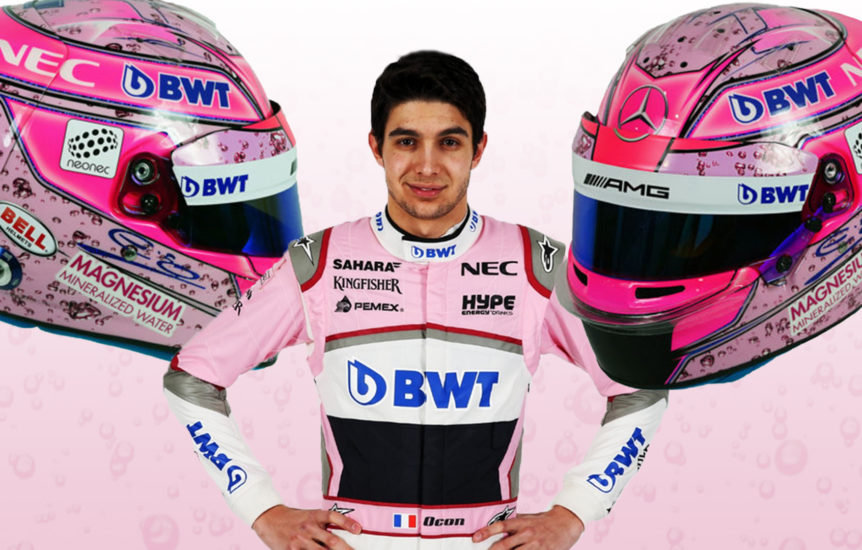 French driver Esteban Ocon delivered one of the most consistent Formula One seasons in 2017, finishing as one of four drivers in the points for 18 of the 20 races. (The others were Lewis Hamilton, Sebastian Vettel and Valtteri Bottas — great company, to be sure.)

This striking Jens Munser Designs helmet was to be used by Ocon in the season-ending Abu Dhabi Grand Prix, but it was not delivered in time. Thus, it is available through Hall of Fame Collection to become the centerpiece of any personal collection.

This Bell HP7 is very rare in that it was never made available to the public like the less-expensive Bell factory RS7 replica models that used stickers instead of paint. Painted by hand, the helmet has the pink colors of Force India’s primary sponsor, BTW, and has a beautiful combination of dark pink graphics edged in black and white pinstriping over a lighter shade of pink. The water droplets airbrushed throughout really catch the eye.

Team sponsor decals from NEC, Neonec and Magnesium Water have been applied as well as Mercedes’ ‘Silver Star’ logo on the top front of the helmet. Missing from the chin is the Johnnie Walker Whiskey branding because of the Arab State’s ban on alcohol-related advertising. The visor is striking, too.

Like all Hall of Fame Collection items, the helmet comes with a Certificate of Authenticity, and a copy of the original invoice, when JMD was paid for its work, can be provided, if requested.