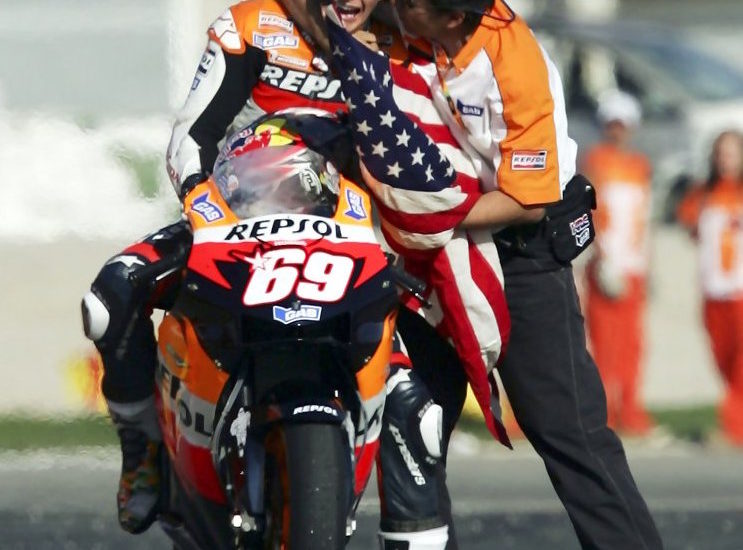 Nicky Hayden will always be remembered as the MotoGP rider who dethroned the great Valentino Rossi.

That monumental day occurred on Oct. 29, 2006 when Hayden capitalized on a Rossi mistake, ending Rossi’s five-year run as champion of motorcycle racing’s top division. Hayden finished third as Rossi valiantly tried to recover from an off to finish five points ahead of the Italian, giving the U.S. its first MotoGP champion since Kenny Roberts Jr. in 2000. No American has won MotoGP’s title since.

Of course, a few other of Hayden’s memorable moments also happened on U.S. soil. The first was his inaugural MotoGP win, in July 2005 at Mazda Raceway Laguna Seca. Hayden had several strong runs that season, but the win shook off what remained of the doubt some had over his riding for the factory Honda team.

In the championship season, Hayden scored a pair of victories, the first in the Dutch TT at the Assen circuit in The Netherlands. He backed that win up with a second in as many years at Laguna Seca, where the fan base wildly cheered him to victory.

Hayden died five days after a cycling accident in Italy in May 2017, and the No. 69 he popularized in MotoGP was retired. He remains a sentimental favorite among motorsports fans.

Hall of Fame Collection is proud to make available items from Hayden’s six seasons with the Repsol Honda team. Alpinestars gloves signed by the legendary rider after using them during the 2004 season are available. Beautiful in color, the pop in orange, blue, white, red and black. His autograph is on each glove just below the knuckle protectors.

Two items from Hayden’s 2008 season are available, too.

An original Arai Corsair V helmet made for Hayden is spectacular, painted by Starline and worn by Hayden in only two MotoGP – Indianapolis and Australia. The helmet has the blue horseshoe logo of the Indianapolis Colts football team on its top. It is one of only two helmets painted by Starline. Hayden finished second in the IMS race, his first podium of the season. In Australia, Hayden posted his second and final podium of the season and of his Honda career. The helmet most likely was kept as a backup as it comes fitted with an original signed race-worn visor and a spare anti-fog, tint-used visor.

An original Ron Burton unfinished artwork was composed in celebration of the hundred years since the first motorized event was held at Indianapolis Motor Speedway to the first MotoGP race held at the track in 2008. Hayden finished second in that race, which carried added importance because the iconic track is located just over three hours north of his boyhood home in Owensboro, Ky., and many of his family and friends were on hand to support him that weekend.

Burton’s artwork features Hayden riding a 1909 Indian track race motorcycle, an original from the Speedway’s first event which Hayden took laps on prior to the inaugural MotoGP event there. Below is an image of Rossi on his Fiat Yamaha, and separating the images are the “Stars and Strips” overlaid with IMS’ famed Winged Wheel. Rossi went on to win his sixth of seven season titles that year.

That Burton, an Indianapolis-based artist, did not manage to complete this composition, adds to the work and gives an inside on how he approached his work. It also is one of the last pieces of artwork that Burton worked on.

Two visors used and signed by Hayden in 2002 are also available. Hall of Fame Collection items come with Certificates of Authenticity.