Happy Birthday to one of our absolute favourites @ 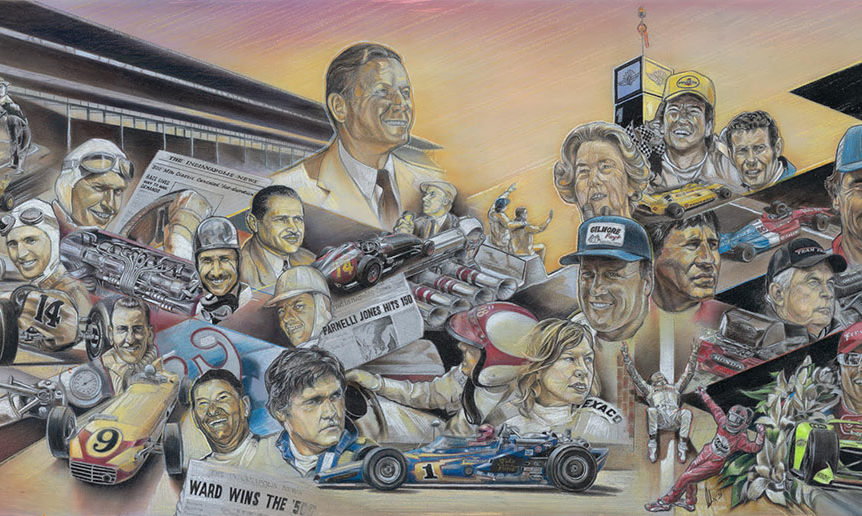 The Indianapolis 500’s program is one of the most trusted and consistent pieces of the event’s history, with stories and photographs that hold the test of time. The publishing of a program dates to the first 500 in 1911, and it is not uncommon for collectors to possess all 104 of them.

Although the race in 2020 was not held in its traditional month or even attended by fans, the program produced by the Indianapolis Motor Speedway staff is a 176-page time capsule of a year never to be forgotten.

The cover was spectacular, one of the best in recent memory, and Hall of Fame Collection is honored to be able to offer the original artwork created by Iowa native Alex Wakefield.

As a youngster living near the town of Burlington, Wakefield developed an interest in motorsports while being around the many local gear heads and motorsports enthusiasts of the day, all the while becoming fascinated by their stories and the sounds, colors and vibrations of car racing. All of these influences shaped his outlook and artwork and, as a result, he doesn’t feel he needs to stick to one particular style and likes to have the freedom of being able to portray motorsport in many different ways.

“I want to show motorsport from my viewpoint,” he said. “I want to take the viewer on a colorful, exciting ride into a sport I’m passionate about. If it’s something that you, the viewer, are moved and inspired by, then all the better.”

The cover art pays homage to “The Greatest Spectacle in Racing” with a highly detailed timeline of some of the greatest moments, people, and machinery that have defined the Indy 500. From the founding fathers of the famed Indiana oval through today’s new owner, Roger Penske, the artwork features many of the personalities whose names are synonymous with the race: Fisher, Harroun, Shaw, Rose, Hulman, Foyt, Penske and so many more.

The artwork takes race fans on a journey through time and is filled with many of the special moments that have defined events held at the “Racing Capital of the World.”

Fittingly, the work took Wakefield about 500 hours to complete and is composed of mixed media on a 28 x 14-inch illustration artboard. This artwork is now available for purchase for one lucky owner.

The artwork will come with a full Letter of Authenticity from the artist.

Below is an interview with Wakefield and Indianapolis Motor Speedway President J. Douglas Boles on the work that went into the creation of the program cover.