F1 and INDYCAR drivers prefer helmets from Bell and Arai 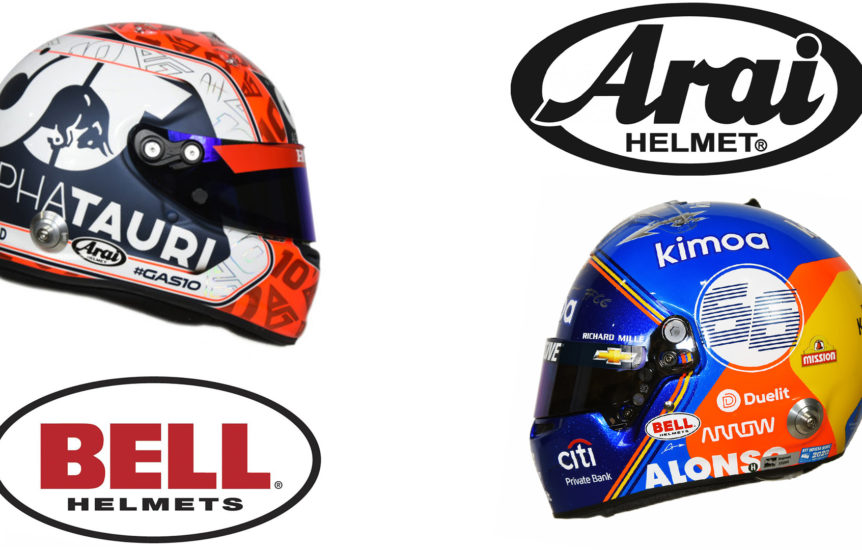 It’s remarkable how much market domination helmet manufacturers Bell and Arai have in Formula 1 and the NTT INDYCAR SERIES.

The latest model is the HP-77 which is slightly heavier than last year’s model but offers a smaller visor opening with reinforced protection. The 2019 model is known as the HP-7. Alonso wore both helmets at IMS this year, and due to INDYCAR’s new Aeroscreen there are forced air intakes in the top portion of the helmets.

These two Alonso helmets have a slightly different paint color, and the race-worn one features Indy’s yard of bricks and his career accomplishments: Two F1 titles, two 24 Hours of Le Mans victories, two World Endurance Championships and a Rolex 24 at Daytona win.

The Arai helmets have been just as popular at Indy and in F1, with 15 drivers wearing one model or another in the 500. The latest-generation helmet featured in the video was worn by Frenchman Pierre Gasly, who this year became the 109th winner of a Grand Prix in history. This helmet was the first prepared for Gasly this season, and he wore it beginning with the opening rounds in Austria.

This year’s model is slightly lighter than last year’s Arai offering, and the latter was used by INDYCAR’s Alexander Rossi. It features a larger visor and eye port.