Many of MotoGP’s all-time champions with with Yamaha 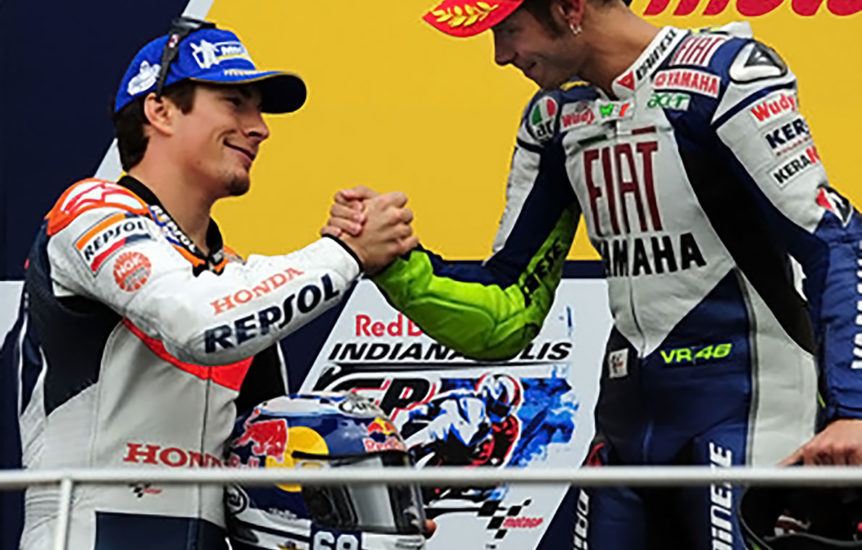 Yamaha ranks third among constructors in winning MotoGP season championships — with 17 — and Hall of Fame Collection is fortunate to have race-worn items from the factory team’s past two season champions.

A helmet worn by Valentino Rossi is among the rarest since “The Doctor” has almost everything he has ever worn in MotoGP in his personal collection. Rossi (on the right in the above photograph) won four titles for Yahama (2004, ’05, ’08 and ’09).

Jorge Lorenzo is another of Yahama’s most decorated champions, and he won all three of his titles for the factory team which trails Honda by four championships. Hall of Fame Collection happens to have leathers from Lorenzo’s 2015 title-winning season, and it includes scuff marks from when he slid at Indianapolis Motor Speedway. Hall of Fame Collection has photo-matched the leathers to that defining moment.

Maverick Vinales could be Yamaha’s next MotoGP champion, and a signed pair of Alpinestars boots are available on Hall of Fame Collection’s website. The website features authentic, race-worn items from many forms of motorsports, including F1, INDYCAR, NASCAR and NHRA to name a few.

All Hall of Fame Collection items come with a Certificate of Authenticity. Click here for the entire MotoGP collection.