F1 returns to Imola this weekend in rare two-day event 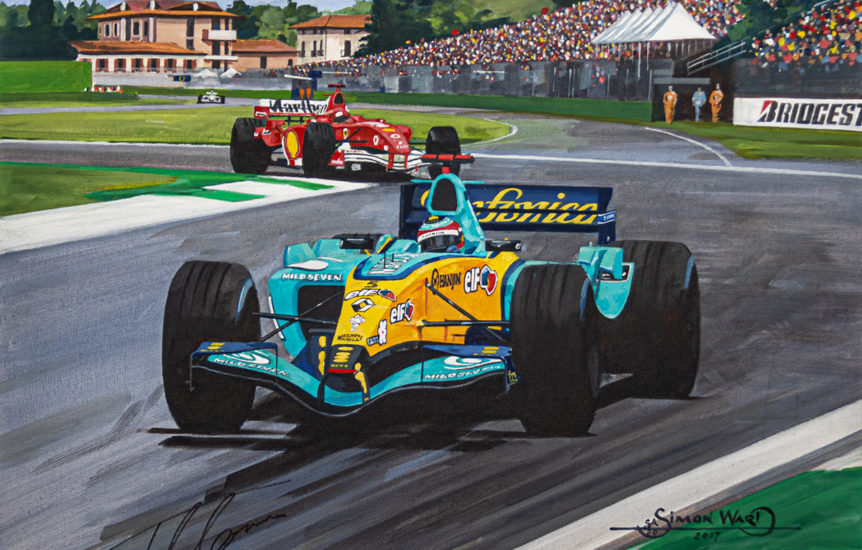 Formula One returns to the Imola circuit this weekend for what is being called the inaugural Emilia-Romagna Grand Prix.

It’s difficult to believe it has been 14 years since F1 last staged the San Marino Grand Prix at Imola, and what a star-studded podium that was in 2006. Michael Schumacher won his seventh race at the circuit – and sixth in eight years — with Fernando Alonso and Juan Pablo Montoya finishing second and third, respectively. Alonso had won the prior year’s race, and Simon Ward’s original artwork of that classic victory signed by Alonso is the featured art of this blog post.

The circuit opened in 1954 and the first F1 show was a non-points race in 1963 won by Jim Clark. The San Marino Grand Prix was held from 1981-2006, with Nelson Piquet the first winner. Ayrton Senna and Alain Prost won three times each, with Nigel Mansell and Damon Hill double winners. Of course, the 1994 event was one of the darkest in F1 history, with Senna and Roland Ratzenberger losing their lives.

The return to Imola is a gift of this pesky pandemic. Series officials began considering this option in February when it seemed unlikely China would be able to stage its grand prix. Confirmation of the substitute came in July.

One reminder: This is a rare two-day event for F1, with on-track action Saturday and Sunday.

Hall of Fame Collection has many important pieces from drivers who raced at Imola in its F1 collection. Items worn by Michael Schumacher in various races are also available. All items come with a Certificate of Authenticity.